With the profit margins of dairy farms consistently squeezed it has never been more important for the farm vet to be seen as a valuable member of the farm team and not as an expensive luxury. There are many ways in which the farm vet can help their clients improve both the welfare of their animals and also their profitability. The management of replacement costs is one such example.

The cost of maintaining the herd (the cost of rearing replacements or buying them in minus the value of culls sold) is a major proportion of dairy farm variable costs. Typically second only to feed and forage. This is largely a “hidden” cost unlike the feed bill or veterinary expenses. A farmer never writes a cheque for ‘culling’ or ‘herd replacement costs’ so this is often a cost which is not calculated or is grossly underestimated.

In the UK a 2010 study estimated the culling rate to be 25%, so on average a dairy cow in the UK national herd completes fewer than 4 lactations. However, there is significant within herd and between herd variation from 11.5% to over 35%1.

These figures can be rather misleading as they give no information on the reasons for culling and it must always be remembered that a lower culling rate is not necessarily an indicator of better management. To assess a farm’s culling we must look a little deeper than just the total culling rate and understand why the cows are being culled. One way of doing this is to separate culling in to voluntary and involuntary.

Voluntary culling is defined as the removal of animals from the herd for production related reasons. An animal will be selected for removal to be replaced by one of higher production potential.

Involuntary (or forced) culling is defined as the removal of animals on the basis of health or fertility problems. The following table gives further detail on these categories.

In reality very few animals are culled for low yields or old age and most fall into the involuntary category and are culled for fertility or health reasons. This leaves farmers with little opportunity to cull for production reasons and so unprofitable animals are retained in the herd, often living with chronic health problems such as lameness or mastitis.

If you ask a dairy farmer what is his most common reason for culling cows the usual answer is infertility, and often this is indeed the ultimate reason for removing the cow from the herd. However, frequently there is an underlying reason why she fails to get back in calf, for example lameness, which is never recorded as a reason for the cull. So the first thing to do is get your farmers to start recording all of the reasons for a cull, not just the final one. Then, armed with this information you can begin to look at the issues on that farm that are leading to cows exiting the herd prematurely. It may be that this is mastitis/ high SCC, lameness or infectious disease (eg. Johne’s disease), but without this information it is impossible to know where to target your efforts.

The second avenue to help farmers reduce their replacement cost lies with their heifer rearing. In order for a farmer to cull cows from his herd, he must have animals which can come in and replace them.

The ability to successfully rear heifers to a size at which they can calve down for the first time at 22-24 months is pivotal to a profitable dairy farming enterprise. Rearing a dairy heifer to the appropriate size and weight to calve for the first time is expensive and time consuming especially when we consider that she will not begin to make a profit until well into her second lactation. 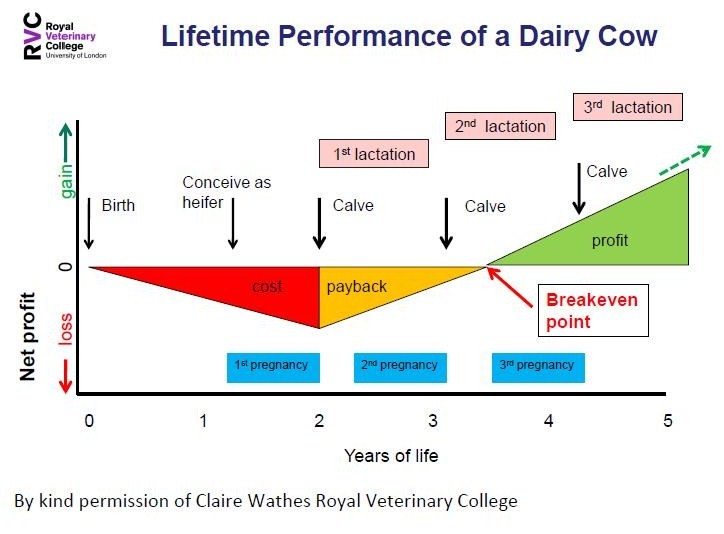 This cost is compounded by the fact that heifer wastage is a big problem on many UK dairy farms. 15% of heifers fail to reach their first lactation and over 20% of those heifers which do calve down successfully for the first time will be lost from the herd before they reach their second lactation 2. So working with clients on issues such as colostrum management, scour and pneumonia prevention to reduce these losses and produce well grown, healthy heifers will also go a long way to reducing their replacement costs.

Culling rates in the UK are very variable and are largely made up of involuntary or forced culls, leaving little room for the voluntary removal of poorly productive animals from the herd.

A high herd replacement rate is a costly problem in terms of both finance and animal welfare which can go unrecognised on farms. It will take a many stranded management plan to deal with this problem, can take several years to get on top of and will require a high degree of veterinary support and involvement. 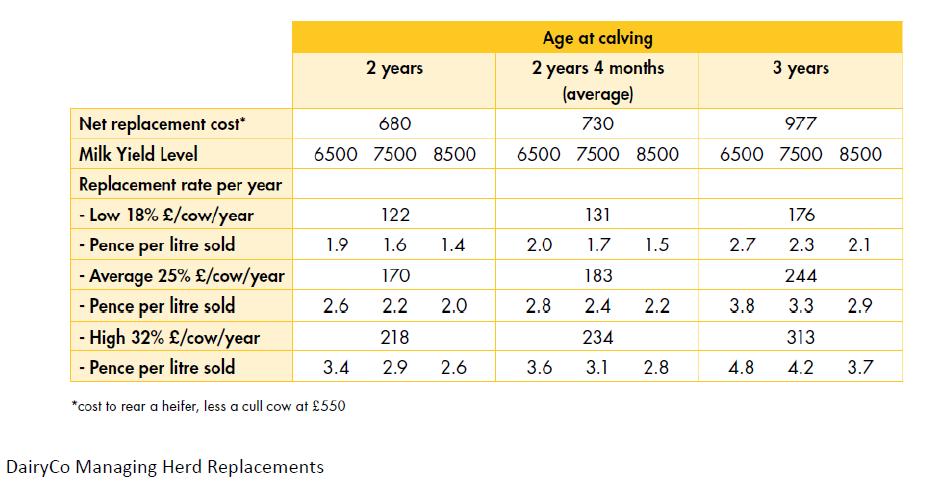 By reducing the number of involuntary culls this will allow more voluntary culls to be chosen improving the quality of the herd and also the monetary value of the culls sent.

When culling rates go down this reduces the number of replacements needed and with a lower age at first calving the number of heifers which need to be kept will be further reduced. This gives additional opportunities to either sell surplus heifers, breed more cows to beef bulls or reduce the amount of space used for heifer rearing.

With many dairy farmers struggling to make ends meet and a growing consumer awareness of animal welfare, improving dairy replacement rates has to be a priority for the UK dairy industry. Helping clients to manage their herd replacement rates provides a great opportunity for the farm vet to demonstrate their value as a member of the farm team, providing quality advice to enable the farmer to reduce costs and improve animal welfare.

Thank you to Boehringer Ingelheim and Metacam for providing this article: