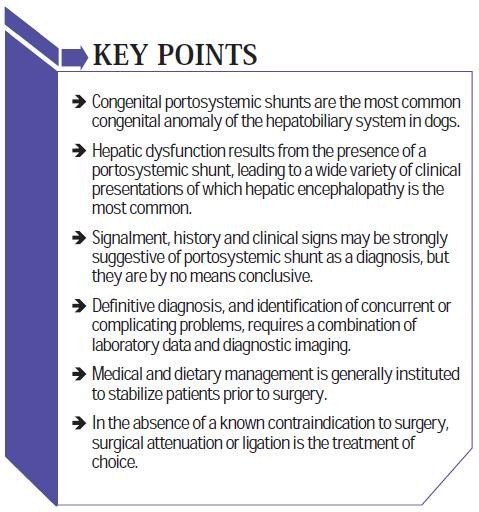 Portosystemic shunts (PSS) are vascular communications taking blood directly from the portal circulation to the systemic circulation, bypassing the liver in the process. Anomalous vessels have been identified connecting between the portal circulation and a wide variety of vessels including the caudal vena cava, the azygous vein, and the renal veins (Figure 1). Animals with PSS may have single, double or multiple shunts and may have concurrent abnormalities such as complete portal vein atresia or portal vein hypoplasia (1). PSS may be acquired or congenital, intrahepatic or extra-hepatic. Congenital PSS are diagnosed more commonly in purebred dogs than crossbreeds, with a reportedly high incidence in cairn terriers, dachshunds, miniature schnauzers, golden and Labrador retrievers, Irish wolfhounds (IWH), Maltese terriers and Australian cattle dogs (2). There is evidence to suggest that left division intrahepatic PSS in the IWH and extra-hepatic PSS in cairn and Yorkshire terriers are inherited and there is a suspicion that PSS may be inherited in Australian cattle dogs and other over-represented breeds. However there are no firm or consistent recommendations regarding breeding policies for affected individuals. Clinical signs caused by PSS can be both variable and vague but neurological signs are the most common presentation. However, some cases have no neurological signs at all and instead may present with a history of recurrent urinary tract infections, crystalluria and urate urolithiasis (3). In others the clinical signs are sufficiently vague that the diagnosis is not immediately obvious; for example, recurrent unexplained infections, ongoing nausea and vomiting, or failure to thrive. Diagnosis is based on combining the history and clinical findings with the results of appropriate laboratory tests and diagnostic imaging. A period of stabilization with medical management is typically recommended prior to surgery to attenuate or close the shunt vessel but surgery should be considered the treatment of choice unless there is a specific contraindication present, such as absence of a portal vein or multiple secondary acquired shunts (2,4,5). 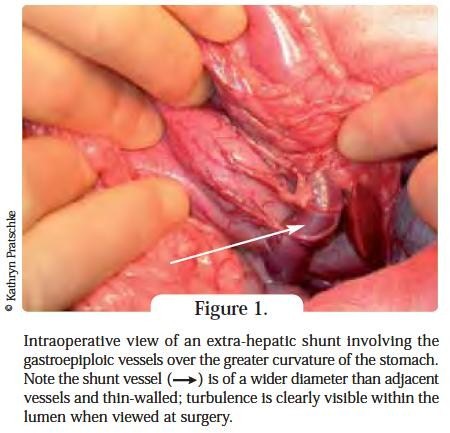 • Extra-hepatic shunts are primarily reported in small breed dogs, with Maltese terriers and Australian silkies being over-represented in reports from Australia, while certain terrier breeds, miniature schnauzers and dachshunds have been reported as more common within Europe, although terrier breeds, Lhasa apsos and shi tzus seem to be frequently presented in the UK and Ireland.

• Intrahepatic shunts are typically associated with large and medium breed dogs with Australian cattle dogs being over-represented in some reports from Australia, while IWH, deerhounds and retrievers appear to be more commonly affected in Europe. It is worth noting that small breeds may have intrahepatic PSS and large breeds may have extra-hepatic PSS, so assumptions should not be made based on the size of the patient.

Affected animals are typically undersized, may have a history of poor appetite and weight gain and are often perceived as runts (Figure 2). Neurological abnormalities are the most common presenting sign and the prime reason for seeking veterinary assistance, and may include shaking, tremors, head-pressing, circling, lack of awareness of surroundings, amaurotic blindness, lethargy, ataxia, seizures and paddling (3,6). Clinical experience shows that affected animals can also present with pyrexia and anorexia due to persistent or recurrent infections where no other obvious signs exist e.g. recurrent abscesses in a young puppy, recurrent gastroenteritis or polyarthritis. Polyuria, stranguria and/or pollakiuria may be noted due to the presence of urate crystals, urolithiasis, increased ammonia excretion and low urea levels (6). Vomiting and diarrhea typically occur intermittently, sometimes associated with nausea.

The pathophysiology of hepatic encephalopathy (HE) is complex and still poorly understood both in veterinary and human patients but is thought to reflect insufficient hepatic capability to deal with hormones, toxins and other components of metabolism. The pathogenesis is multifactorial, involving increased blood ammonia, other synergistic toxins, alterations in monoamine neurotransmitters, alterations in amino acid neurotransmitters, GABA, glutamate, glutamine and increased cerebral levels of endogenous benzodiazepine-like compounds (3,7). Elevated peripheral and central concentrations 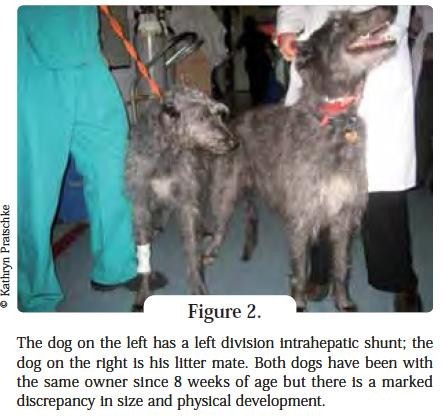 of manganese have been recently identified in affected animals (8,9). It seems that the only consistent finding is that none of these factors will reliably induce HE on their own, underlining that this is not a straightforward problem. It may also be that some dogs with neurological signs and a diagnosis of PSS actually have concurrent central neurological disease. HE can be triggered by many factors including feeding, constipation, gastrointestinal bleeding (effectively a high-protein ‘feed’), sedatives, anesthetics, azotemia, hypoglycemia, hypovolemia and infection.

The majority of animals with congenital shunts are identified at less than 1 year of age, but those with moderate, mild or atypical signs may not be diagnosed until middle-age. Traditionally, patients above 2 years of age were held to have poorer outcomes; however the available clinical evidence does not support this and older animals should not be automatically viewed as non-surgical (10-12).

The signalment, clinical signs and history will often be suggestive of a PSS; however there are other conditions which may present in a very similar manner so a full diagnostic work-up is essential in every case and assumptions should not lead to shortcuts being taken. This also ensures that secondary complicating factors are not missed, such as clotting abnormalities requiring management prior to surgery.

- Microcytosis +/- concurrent anemia is seen in up to 72% of dogs. This anemia typically resolves following surgical closure of the shunt, and is probably due to altered serum iron concentrations and functional defects in iron transport.

- Leukocytosis is variable, and may be related to inadequate clearance of bacteria and toxins through the portal system.

Primary bile acids are synthesized in the liver, conjugated with taurine, secreted into the bile canaliculi and stored in the gallbladder. After a meal, the gallbladder contracts, releasing bile acids into the intestines, where they enhance fat digestion and absorption. In the distal ileum a bile acid-sodium coupled transporter catches the bile acids and returns them to the portal circulation. Efficient uptake and re-secretion by hepatocytes ensures “enterohepatic circulation” of > 95% of all bile acids, with the remaining 5% or so being lost in the feces. Shunting of resorbed bile acids to the systemic circulation means that most animals with PSS will have elevated bile acids, although there are other conditions that may also cause elevation of bile acids. In addition to measuring fasting bile acids, a bile acid stimulation test should be performed, to obtain paired pre- and post- prandial samples. High post-prandial bile acid level or fasting serum ammonia only denotes abnormal liver function, and is not specific for PSS.

Reduced ammonia metabolism means that baseline ammonia levels are likely to be increased, although they can be normal in up to 20% of cases if there has been a period of prior medical management or a long period of fasting. Some breeds are known to have higher than normal ammonia levels (e.g. IWH). It is important to use the appropriate cut-off levels to maximize the sensitivity and specificity of these tests. The ammonia tolerance test is quite cumbersome, and carries inherent risks in animals with impaired liver function.

Nuclear scintigraphy is a non-invasive means of evaluating the presence of shunting. In normal animals technetium pertechnetate infused into the mid-proximal colon is transported through the portal system to the liver. In animals with a shunt, a greater proportion of the technetium is carried rapidly past the liver and highlights the heart. The shunt fraction compares activity in the liver with activity in the heart on the first passage of the radiopharmaceutical. In a normal dog, the shunt fraction should be < 15%. Animals with congenital shunts usually have shunt fractions in excess of 60% although there is a lot of variability (13). Note that this method does not allow imaging of the portal circulation and cannot differentiate reliably between single and multiple shunts, nor intraversus extra-hepatic shunts and therefore it is of limited use for pre-surgical planning. Trans-splenic scintigraphy provides superior scans with more reliable information regarding shunt location and number, but carries a greater risk associated with ultrasound-guided injection into the splenic parenchyma in patients prone to clotting abnormalities (14).

Come back next week for Part 2 covering medical and surgical management!