Cytology is an essential complementary technique 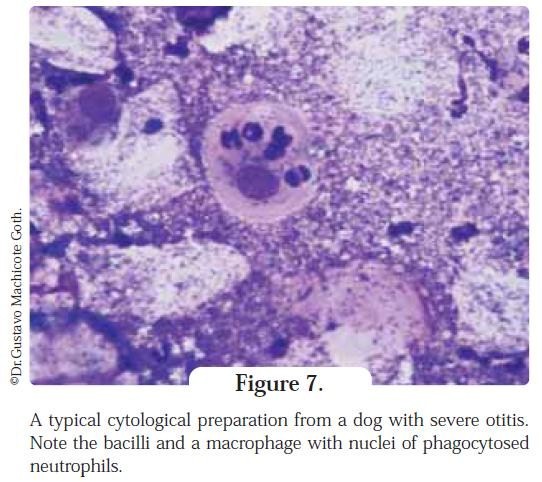 for diagnosis and monitoring of treatment. It is the technique of choice – rather than culture – and should be performed before any empirical or first line therapy. Cultures and antibiograms are usually performed for recurrent otitis or if rods are present (5). Commercial kits for immediate staining are very useful (Figure 7) though cannot differentiate gram organisms. If the extracted sample is ceruminous it is advisable to flame-fix the preparation, otherwise the lipid content may be washed away by the alcohol in the kit. When dealing with a case of complex otitis previously subjected to different treatments or which has failed to adequately respond to therapy, cytology and sample collection must be performed, differentiating between samples from the vertical canal and those obtained close to the eardrum. Myringotomy may prove necessary for obtaining samples from the middle ear.

With external canal cytology, a number of authors advocate that the presence of more than three Malassezia organisms, five cocci or one bacillus per immersion oil field is strongly suggestive of infection (2,5). This is confirmed if neutrophils are also observed. In the middle ear, one bacterium per field, or alternatively the presence of neutrophils or nuclear remnants, is significant (5).

It is essential to determine as far as possible the various causative factor(s). Thorough ear cleaning is necessary not only for inspection but also as treatment.

Hygiene is essential to remove perpetuating elements and to ensure effective treatment. Washing seeks to eliminate exudates that interfere with therapy and bacterial toxins, cell detritus and free fatty acids that stimulate inflammation (8); washing also has an astringent effect which can inhibit ear fold dermatitis. It is important to soften the accumulated earwax using cerumenolytic agents (Table 5) - if possible eardrum integrity should be verified before performing the washings as this may determine which fluid should be used - and the agent should ideally be allowed to act for 5-15 minutes before being fully rinsed with saline (5,9). In otitis media, cleaning must extend to the middle ear.

The clinician should be careful when dealing with otitis in cats; they are much more sensitive to irritative middle ear problems and whilst vestibular dysfunction in dogs can take from only hours to two days to recover, in cats recovery is slow, and the prognosis can be poorer. With a clean ear, a ruptured tympanic membrane can heal within 5-10 days (1). The use of cotton sticks or balls with tweezers is not advised for cleaning deep into the ear, since direct damage to the eardrum may result; alternatively, pressure and inward displacement of the luminal contents may cause membrane rupture, whereby detritus accumulates in the bulla, giving rise to otitis media. 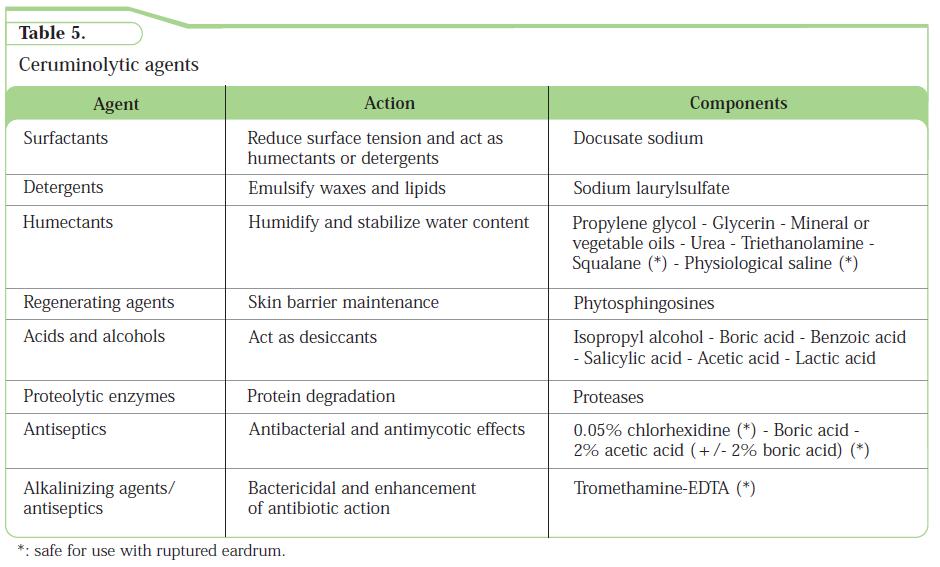 Topical formulations generally combine glucocorticoids/ anti-inflammatory agents, antibiotics, antifungal agents and antiparasitic drugs. In some cases the products may contain one, two or more components. The veterinarian should be aware of the vehicle in the drug formulation; oily vehicles or ointments should be chosen for dry otitis with scaling or crusts, while aqueous formulations (solutions or lotions) are used in exudative otitis. It is important for the medication to extend deep into the ear. Owners tend to be reluctant to use a cannula for administering a product and so should be instructed to spread the pinna upwards and then massage the ear after instilling the treatment. The amount to be administered depends logically on the size of the animal, and it is preferable to speak of a stream of liquid rather than droplets.

The first choice antibiotics are the amino-glycosides, since their spectrum of action covers most of the prevalent bacteria in ear disease. Fluoro-quinolones may be a good choice in severe otitis produced by gram-negative organisms. In cases of intensely purulent otitis, polymyxin may be inactivated; as a result, it is best to select another antibiotic in those situations where good prior cleaning is not possible (5). When the antibiogram results suggest the administration of an antibiotic not available in eardrops, use can be made of eye-drops or injectable formulations that can be adapted for use in the ear. 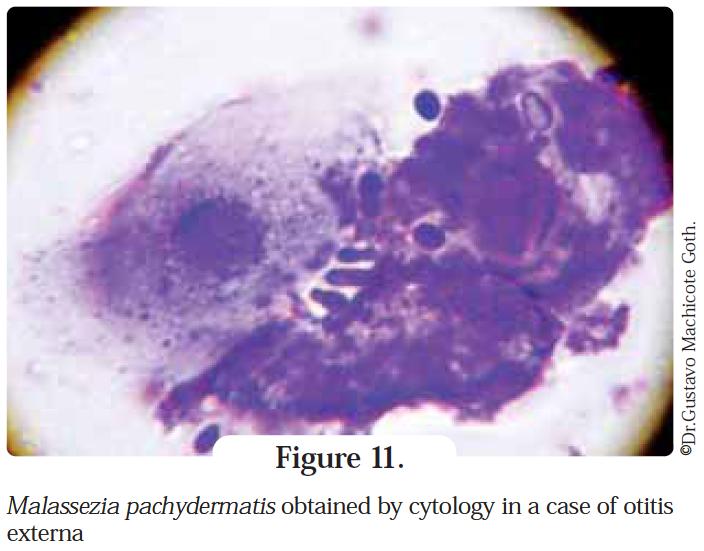 For otitis due to Malassezia (Figure 11), the effective available agents are miconazole, posaconazole, clotrimazole, nystatin or ketoconazole, 0.05% chlorhexidine, or 2% acetic acid + 2% boric acid. When considering aural antiparasitic agents, it must be remembered that Otodectes cynotis is a primary cause of otitis. The most commonly used drugs against Otodectes are pyrethrins, macrocyclic lactones (ivermectin, selamectin, moxidectin), amitraz (not in cats), fipronyl (intra-auricular drops in the presence of an intact eardrum) or the oily components of different eardrops. In acute cases with major inflammation and pain, a potent corticosteroid is indicated (e.g. betamethasone, mometasone, fluocinolone); once the process has been controlled, or in cases where treatment is prolonged, a less potent agent such as hydrocortisone should be used. In some cases cutaneous hyperplasia can occlude the entrance to the ear to the point where an otoscope cannot be inserted. In these cases systemic medication with immunosuppressive levels of corticosteroid may be required (10) for 3-14 days, followed by halving of the dose every 48-72 hours as maintenance treatment. Corticosteroids not only reduce the inflammation but also lessen the viscosity of the ear contents, thus facilitating their expulsion.

Tacrolimus as an ointment or solution for topical application can be used as long-term maintenance where the ear has a tendency towards hyperplasia and inflammation (11) and may be an option in cases of feline necrotizing otitis (12).

When there is severe otitis, it may be necessary to administer anti-inflammatory drugs and antibiotics systemically. Systemic therapy should also be considered where topical treatment is not possible (e.g. canal obstruction, poor owner compliance). 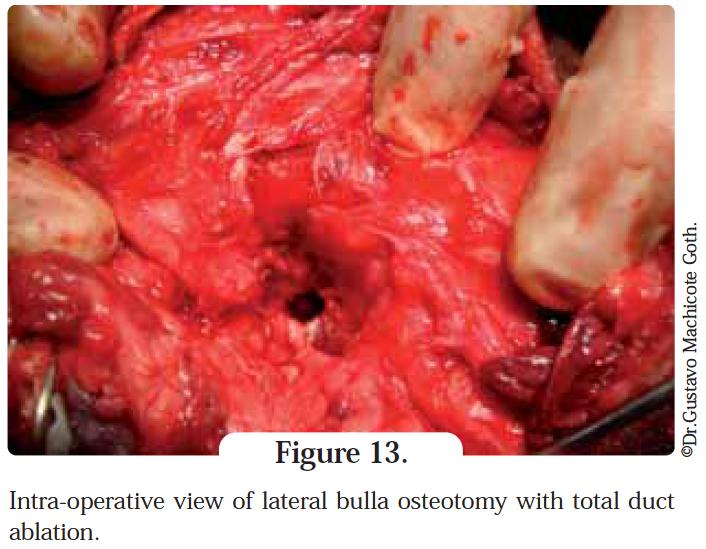 All clinicians have had the disagreeable experience of being unable to control or resolve otitis, viewing surgery as a valid treatment option in such situations. However, it must be emphasized that if the primary causes are not detected and avoided, surgery can also be condemned to failure. In the more serious cases where the morphological changes prove irreversible and the resolution of otitis becomes impossible, total canal ablation with drainage of the bulla contents may be the only solution (Figure 13).