Ultrasonography of the small intestine in small animals- Part 1

Ultrasonography of the small intestine in small animals - Part 1 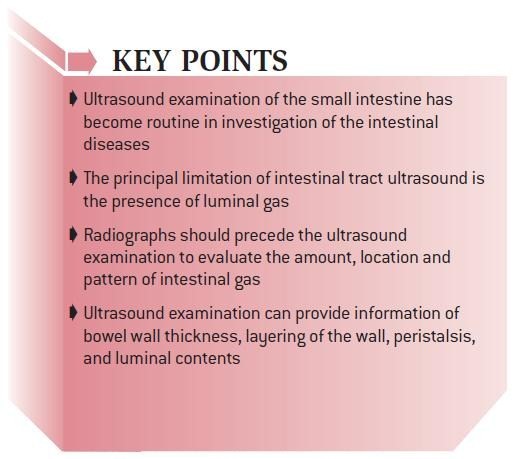 Ideally, the patient should be fasted overnight to reduce the interference with gastric contents and intraluminal gas. However, non-fasted dogs may show adequate image quality. The intra-luminal gas causes imaging artifacts, such as reverberation, comet tail and acoustic shadowing. Sedation is not usually necessary, but when needed, xylazine should be avoided because it causes gastric stasis leading to massive gaseous distension (1).

The animal is typically placed in dorsal recumbency, although the position may depend on the patient’s restlessness, discomfort, or on the operator’s preferences. The examination with the patient standing, or via a hole in the supporting table, on the recumbent side, is useful. This makes use of the intraluminal fluid gravitating to the dependent wall of the stomach or intestinal tract where it serves as an acoustic window (2).

Ultrasonographic anatomy of the small intestine

The duodenum is located in the right side of the abdomen, beginning from between the last ribs and then followed distally along the right body wall. The other portions of small bowel are assessed moving the transducer from right to left and left to right, and then from cranial to caudal to image the entire small intestinal tract. Sections of small intestine will be viewed sagittally, transversely and in various oblique images, depending on the transducer and intestinal tract position (2). The ileum can be identified by its location in the right mid-to cranial abdomen and its relationship with the ascending colon and cecum. In the intestinal tract wall layers, wall thickness, peristalsis, and luminal contents must be assessed (1).

Layers of the bowel wall

Five ultrasonographic layers can be identified in the small bowel, corresponding from the lumen outward, to the luminal/mucosal interface, mucosa, submucosa, muscular, and the serosa layer (Figure 1). The mucosa and muscular layers are hypoechoic, whereas mucosal surface, submucosa and serosa are hyperechoic (3). The mucosal layer is the thickest layer of the intestinal wall. The ileum in cats can be identified by a thicker echogenic and irregular submucosal layer (Figure 2) (4).

The thickness of the bowel wall is measured between the outer echogenic serosal surface and the mucosal-luminal interface (Figure 1). In dogs, the intestinal wall is between 2-6 mm thick depending on the size of the dog and part of the small bowel (Table 1 and 2) (5), while in cats a mean of 2 mm thick has been evaluated (Table 1) (6).

The ultrasonographic appearance of the small intestine depends on the type and amount of luminal content (Figure 3). When empty, a “mucous pattern” is present, the bowel lumen appears as a hyperechoic core ("mucosal stripe") surrounded by a hypoechoic halo of the bowel wall. This hyperechoic core represents mucus and small air bubbles trapped at the mucosal-luminal interface. When fluid is present in the bowel lumen (“fluid pattern”), an anechoic area is seen between the walls of the bowel that appears tubular in long axis views, and circular in short axis views. Gas-filled small intestinal loops cause a highly echogenic interface with distal acoustic shadowing or reverberation (“gas pattern”) (7). 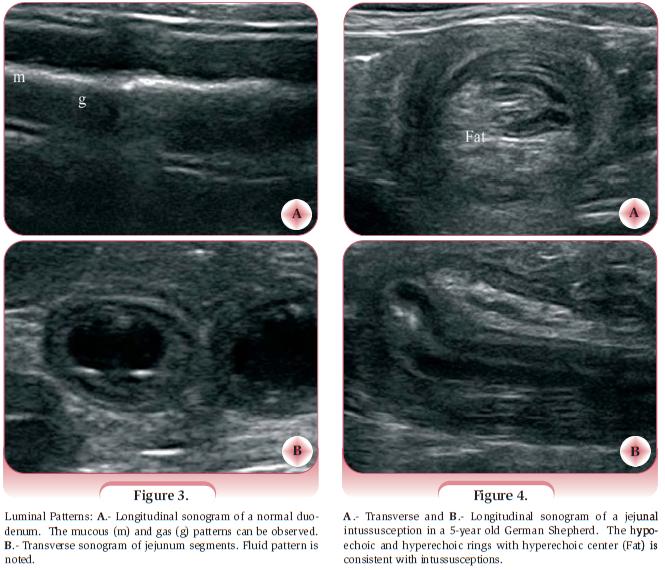 Intussusception is the invagination of a portion of the intestine, called intussusceptum, into the lumen of an adjacent segment of intestine, called intussuscipiens. Intussusceptions usually occur within the jejunum, ileocolic or ileocecal junctions or within the colon (colocolic) and rarely do they involve the stomach or duodenum. They often occur in puppies and kittens secondary to primary intestinal disease such as enteritis from intestinal parasites, bacterial or viral infections. In older patients, the intussusceptions can occur close to pseudocysts, enlarged lymph nodes, foreign bodies or tumoral mass (2).

Intussusceptions have a characteristic ultrasound appearance that in most cases allows a definitive diagnosis to be made with confidence (8).

The most common sonographic pattern observed in transverse sections of the bowel is a target-like mass consisting of multiple hyperechoic and hypoechoic concentric rings around a hyperechoic center that represents the entrapped mesentery (Figures 4A and 4B). In longitudinal sections, multiple hyperechoic and hypoechoic parallel lines are usually visible. Ultrasonographic patterns may vary with the length of bowel involved, the duration of the process, and the orientation of the scan plane in relation to the axis of the intussusception (9). So, in some instances the concentric or layered appearance is distorted and not as easily recognized because of inflammation and edema. The presence of a thin, external hypoechoic ring of the target-like mass is usually associated with reducible intussusceptions. The appearance of fluid within the apex of the intussusceptions, absence of peristaltic activity of the bowel, and enlarged lymph nodes in the intussuscepted intestine are compatible with irreducible intussusceptions (10). However, the recognition of blood flow in the intussuscepted bowel using color flow Doppler ultrasonography appears to be the most valuable factor for predicting bowel reducibility (10). 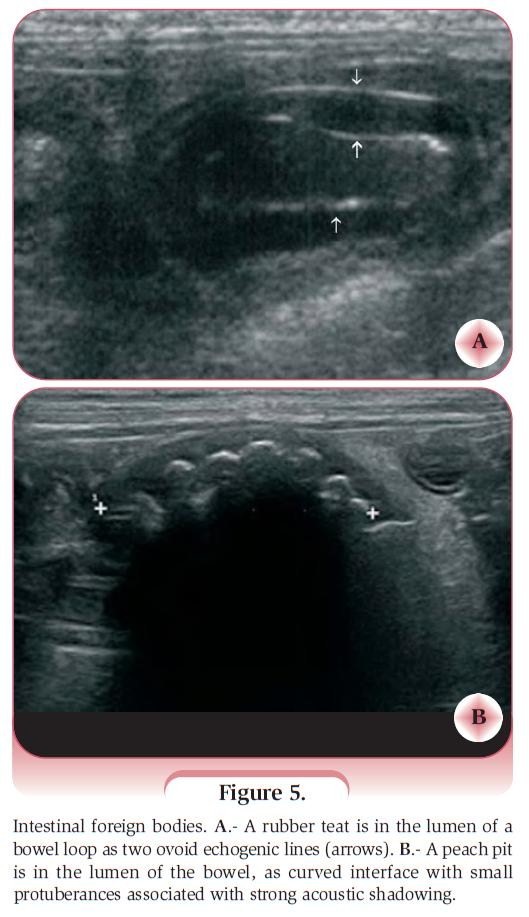 Some foreign bodies like balls or rocks are easily identified by ultrasonography because of their characteristic shape and the presence of acoustic shadowing. However, the balls may vary in echogenicity, depending on their physical properties (Figure 5A). Most of foreign bodies produce a bright interface associated with strong shadowing. Occasionally, the contour of the interface can help identifying the type of foreign body in the intestine (Figure 5B) (2).

The ultrasonographic appearance of the perforated bowel wall by foreign bodies, such as sticks, is a local thickening and focal loss of layers. Moreover, bright mesenteric fat, peritoneal effusion, free gas in the abdomen, fluid-filled intestines and reduced motility may be present, associated with perforation (11).

Linear foreign bodies are commonly seen in cats but may also be seen in dogs. The type of foreign material ingested included string, cellophane, pieces of cloth and pantyhose. This type of mechanical obstruction has an accordion-like pleating or plication appearance of the small intestine on radiographs. They may be diagnosed with ultrasonography by recognizing the characteristic plicated appearance of the small bowel. The sonographic signs are abnormal undulating path of the bowel and presence of a bright linear interface within the lumen (Figure 6). The affected bowel may be fluid and gas dilated or just appears thickened and bunched. In the gastroduodenal linear foreign body, the foreign material may be observed in the stomach (12). The presence of secondary problems associated with a linear foreign body, such as peritonitis, is suggested if free gas or fluid in the abdomen is detected or the mesentery is hyperechoic with poor sonographic detail, and lymphadenopathy is present. An aspirate of any free peritoneal fluid may be useful to assess the presence of peritonitis (12).

The presence of gastrointestinal parasites can mimic the appearance of a linear foreign body (7,12). The ultrasonographic pattern of a gastrointestinal roundworm is a hyperechoic linear nonshadowing structure with a hypoechoic center (13). 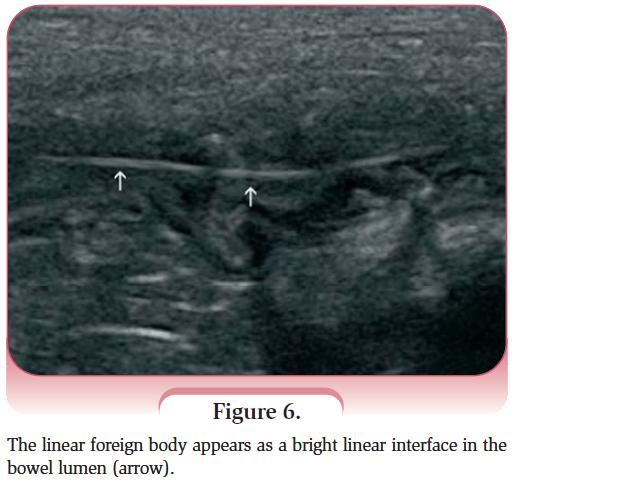 IBD has clinically been defined as a spectrum of gastrointestinal disorders associated with chronic inflammation of the stomach, intestine and/or colon of unknown pathogenesis and etiology. Histologically, IBD is characterized by diffuse inflammatory cell infiltration of the mucosal layer. These cell populations are typically dominated by lymphocytes and plasma cells but may also include eosinophils, neutrophils and macrophages (14).

Intestinal wall thickness has been a criterion for determining activity (clinical manifestation of the disease) in humans with inflammatory bowel disease. However, intestinal wall thickness has not been found to be specific or sensitive for diagnosis of inflammatory bowel disease in dogs (Figures 7 and 8) (15,16). Therefore, measurements of wall thickness alone may lead to false-negative results for dogs with intestinal wall inflammation (16). In addition to thickness, altered wall layering appears to be an important finding which differentiates inflammatory from neoplastic and granulomatous infiltration (17). However, loss of layering has also been reported in severe enteritis or in the case of hemorrhagic, necrotizing, or granulomatous infiltration (17).

Nowadays, it appears that the most important ultrasound parameters that may allow differentiation of dogs with IBD are the echogenicity of the small intestinal mucosa and the presence of secondary abnormalities of the bowel and contiguous organs (16). Two patterns of increased mucosal echogenicity have been reported, hyperechoic speckles and hyperechoic striations (16). Hyperechoic striations are associated with a histopathologic finding of dilated mucosal lacteals and are highly specific for protein-losing enteropathy (Figure 9) (16,18). Hyperechoic speckles are a sensitive parameter for determining the presence of inflammatory disease, but they are non-specific for differentiating disease category and activity. The speckles within the mucosa may represent chronic changes that may require a longer period of time to resolve (16). A normal, hypoechoic intestinal mucosa in dogs with chronic diarrhea is a sensitive and specificity finding for the diagnosis of food-responsive disease (16). The presence of secondary abnormalities of the bowel, such as free abdominal fluid, edema of the pancreas, or thickening of the gallbladder wall, as well as distended bowel segments are observed in dogs with protein-losing enteropathy (Figure 9), although it is uncommon in dogs with inflammatory bowel disease (16).

Corrugation of the small bowel appears as regular waves of undulated bowel segments (Figure 10). This pattern is a sensitive, but nonspecific indicator of intestinal or abdominal disorders. It can be seen in association with enteritis (parvovirus, lymphocytic- plasmocytic enteritis and hemorrhagic duodenitis), pancreatitis, peritonitis and bowel wall ischemia (19).

Remember to come back next week for Part 2.  You may also be interested in the series of "How To" Ultrasound videos in the "How To - Small" section, CLICK HERE to go there now.

This article was previously published in 2012 but the principles are unchanged.