Canine and feline skin tumors (Part 2)
Mast cell tumors
The presentation and behavior of mast cell tumors (MCT) differs between the cat and dog.
Canine MCT
These are one of the most common cutaneous neoplasms, representing up to 20% of all canine skin tumors (6). They tend to affect older animals (mean age 8 years) but may occur at any age. Several breeds of dog including the boxer, Staffordshire bull terrier, and possibly the Labrador and golden retriever appear to be predisposed. The tumors show tremendous diversity in gross appearance, clinical behavior, rate of metastasis and response to treatment, as a result of which they present considerable prognostic and therapeutic problems. The following is a short review; readers are advised to refer to the extensive literature available.
Presentation/clinical signs
The gross appearance can mimic any other cutaneous tumor (Figures 4,5). Low grade, well differentiated tumors usually present as a solitary slowly growing, dermal nodule. Some tumors ulcerate through the skin and in some cases local release of histamine from tumor cells may cause the lesion to fluctuate in size and become red and ‘angry’ looking. More aggressive MCTs may present as large, ill-defined soft tissue masses and some may be surrounded by satellite nodules as the tumor spreads through surrounding cutaneous lymphatic vessels (Figure 6).
Behavior
MCTs can vary in behavior, from slowly growing, low grade tumors which follow a benign course to rapidly growing, invasive, highly malignant tumors. Histological grading based upon the degree of cellular differentiation, the mitotic index and invasion of adjacent tissue has been shown to be of prognostic value (7-9). Behavior, suggested treatments and prognosis of MCTs are discussed in Table 2.
Malignant MCTs may metastasize either by the lymphatic route or via the blood. In most cases the first sign of metastasis is enlargement of the local lymph node. Discrete pulmonary metastases are rare; disseminated MCTs more commonly metastasize to the spleen, liver, kidneys and the skin. 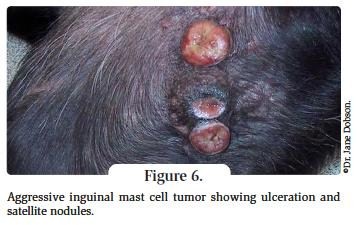 Paraneoplastic Syndromes
Both solitary and metastatic MCTs can have local or systemic effects via the release of histamine and other vasoactive amines from the tumor cells. This can cause local edema and erythema of the adjacent tissues and distant gastro-duodenal ulceration leading to anorexia, vomiting, melena, anemia and, in some cases, perforation.
Diagnostic Investigations
Hematological assessment may indicate anemia due to blood loss from a bleeding intestinal ulcer. Circulating mast cells (mastocytosis) are rare but eosinophilia may be present.
Mast cells can be readily identified by FNA cytology and this simple technique should be performed prior to surgical removal of any cutaneous lesion. MCT cannot be graded accurately on cytology alone, although some indication of the degree of differentiation of the tumor cells may be possible. Excisional samples should therefore be submitted for histological grading and assessment of the margins of excision.
Local and regional lymph nodes should always be evaluated by palpation, radiography/ultrasound (as appropriate) and cytology. Ultrasound evaluation of liver, spleen and kidneys is also valuable. Pulmonary metastasis is rare but skin is a common site for MCT metastasis and skin nodules should be investigated by FNA or biopsy. Dogs presenting with multiple low/intermediate grade MCT have separate de novo tumor development rather than metastatic disease, and each should be dealt with as a separate tumor. Survival time in these animals is not less than dogs with a single MCT (10).
Treatment
Surgical resection is undoubtedly the treatment of choice for any well differentiated MCT. Wide surgical resection is not as important as previously thought and 2 cm margins should be adequate for all grade I & II tumors < 5 cm diameter, but not the most aggressive tumors (11). The most common cause of treatment failure is poorly executed or planned surgery, leading to inadequate resection of the primary tumor and subsequent local recurrence. The first surgical attempt stands most chance of success and cure rates for subsequent surgical excisions or adjunctive therapies are low. It is vitally important to identify a MCT (cytologically or histopathologically) prior to any attempt at treatment so that appropriate surgical margins can be planned and achieved at the first attempt.
Radiotherapy may be beneficial as a post-surgical treatment in cases of intermediate tumors where complete surgical resection is not feasible (12) and, on occasions, may be used in conjunction with chemotherapy for the treatment of tumors which cannot be surgically excised due to their site (13). There is no good evidence for the use of radiotherapy as a sole treatment.
For grade II tumors with a high mitotic index and grade III tumors chemotherapy is used to prevent or slow metastatic spread (14). Short term responses have been achieved with protocols involving vinblastine, chlorambucil and prednisone, or lomustine (CCNU). Two tyrosine kinase inhibitors, masitinib and toceranib, are licensed in some countries for use in unresectable or recurrent intermediate and high grade canine MCT; although experience is lacking, they show promising efficacy (15,16). It should be remembered that surgery is still the treatment of choice and a judgment of unresectable should be made by a specialist surgeon.
Patients with systemic and/or gastrointestinal signs must be treated appropriately with agents such as H2 antagonists, cimetiidine or ranitiidine. Sucralfate is also of benefit. 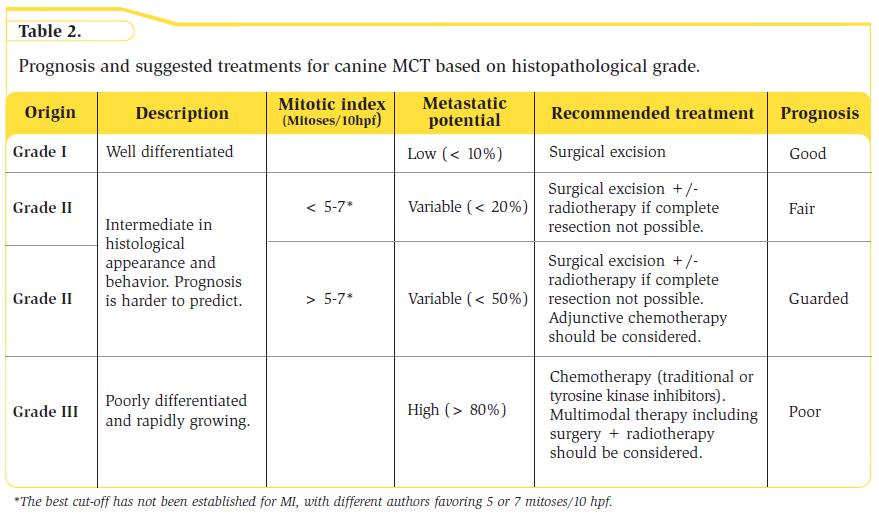 This article was first published in 2012.