This article was kindly provided by Royal Canin:

The dog had been scratching, biting and rubbing herself against objects intensely for the last six months. She has been given several oral antibiotic courses, which, according to the owner, were to treat the presence of “bacterial infections”. Initially there was a good clinical response with a reduction in the skin lesions and pruritus, but later it was observed that there was no longer any response to treatment. A 6-week low-allergy diet based on hydrolysed proteins did not eliminate the pruritus or the skin lesions. Therefore, a clinical diagnosis was made of atopic dermatitis and treatment was commenced with cyclosporine at a dose of 5 mg/kg orally on an empty stomach once daily.

At presentation, and despite the 4-weeks of cyclosporine treatment, the patient had diffuse and intensely itchy skin lesions. The dog appeared to be healthy, was fully vaccinated and was given monthly anti-parasite prophylaxis using imidacloprid spot-on.

The dermatological examination showed hypotrichosis with erythema and excoriation on the side of the body and extremities (Figures 1 and 2) and erythematous macules and papules throughout the underside of the body (Figure 3). The patient also presented alopecia with haemorrhagic crusts on the pinna margins (Figure 4) and had a positive pinna-pedal reflex when the ear margins were rubbed. 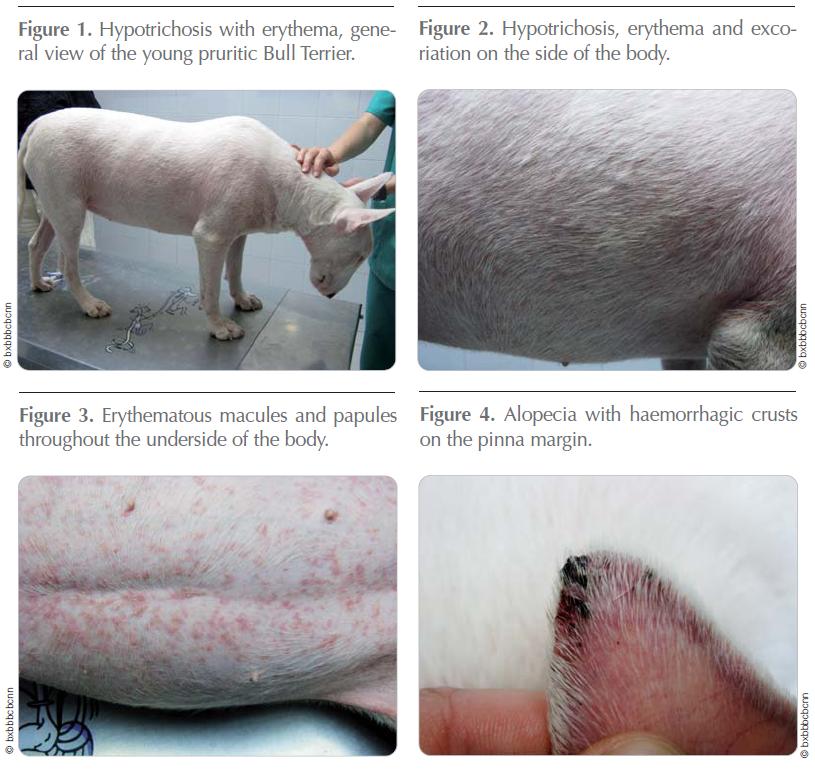 What diagnostic and/or therapeutic steps do you suggest?

4. Perform multiple microscopic examinations of hair and superficial and deep skin scrapes, and perform a cytology examination of the papules.

Based on the clinical symptoms observed (papular dermatitis, dermatitis with scabs on the margins of the pinna and severe pruritus) and the dog's clinical history (pruritus that is unresponsive to cyclosporine used at the correct dose), the most likely differential diagnoses are, in this order:

4. One of the above with superficial pyoderma (bacterial folliculitis).

In a dog with pruritus, and in particular if pruritus is intense, it is essential to rule out parasitic skin diseases, mainly superficial mites such as Sarcoptes and Cheyletiella, before a final diagnosis of allergic dermatitis is made. 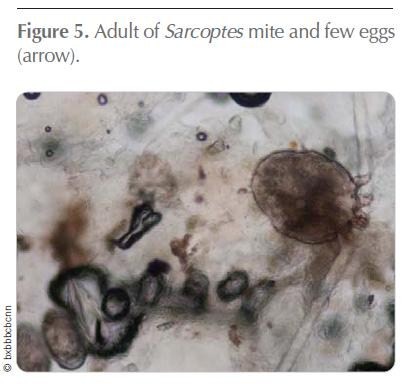 Multiple microscopic examinations were performed on hairs plucked from the side of the body and the side of the extremities, which did not reveal the presence of parasites. Superficial scrapes were taken of some abdominal papules and ear margins, which confirmed the presence of mites that were consistent with Sarcoptes scabiei (Figure 5). Finally, an impression cytology technique was used to examine the surface of one of the partially-eroded papules. This showed the presence of some neutrophils and eosinophils and absence of cocci.

Acaricide treatment was prescribed with one selamectin spot-on application every 21 days, three times, associated with a topical antiseptic treatment with a 3% chlorhexidinebased shampoo every 7 days. The cyclosporine treatment was discontinued. After 40 days the pruritus and skin lesions had resolved.

The techniques used to diagnose ectoparasites caused by superficial and deep mites are skin scrapes (superficial and deep), microscopic examination of plucked hair and adhesive tape impression examination. These are basic complementary tests that are simple to perform and they provide immediate information. For this reason they should be routinely used at dermatology consultations of dogs with pruritus.

These tests are particularly indicated:

• To confirm the diagnosis of ectoparasitic diseases caused by superficial or follicular parasites (mainly sarcoptic mange, cheyletiellosis and demodicosis).

• Detection of arthrospores and dermatophyte hyphae on the hair shaft.

• Pencil or permanent pen to mark the slide with the case name and the body area of sample,

This technique is used to identify superficial mites such as Sarcoptes scabiei and Cheyletiella spp. There are usually only a small number of superficial mites, especially in the case of sarcoptic mange, and so test sensitivity is low (about 50%). Therefore, this test should not be used to rule out the disease.

A few tips to increase the diagnostic sensitivity of this test:

• Perform several scrapes (at least 4-6). This increases the amount of skin surface examined and improves the possibility of finding parasitic agents.

• Choose appropriate lesions and areas for sampling. Thus, if cheyletiellosis is suspected, collect the characteristic whitish scales that are found in this disease (Figure 6). If sarcoptic scabies is suspected, samples should be taken from skin areas that are not too exposed to the dog's scratching (pinna margins, elbows) because these areas are likely to have more mites. If there are papules, the papule surface is the best area for scraping, because each papule represents a local lesion in response to the presence of the mite.

• Be sure of examining the whole sample.

• Avoid taking samples from areas covered with crusts that are particularly haemorrhagic or exudative, because the presence of debris and blood hinder the examination, and in highly traumatised areas there will be fewer parasites.

Before collecting the sample it is best to cut or shave the hair in order to remove structures that could hinder the microscopic assessment of the sampled material. Place some mineral oil on the area to be sampled in order not to disperse the material (Figure 7). Use the scalpel to carefully scrape the area, trying to collect as many scales and/or crusts as possible. The sample should be spread on the slide like "butter on bread". The slide should be previously prepared with a small amount of mineral oil. Afterwards, the area that has been scraped should be disinfected with a surgical disinfectant. 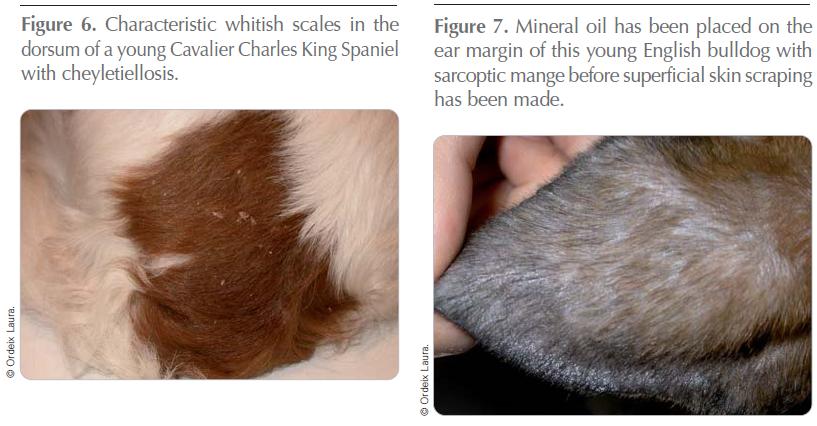 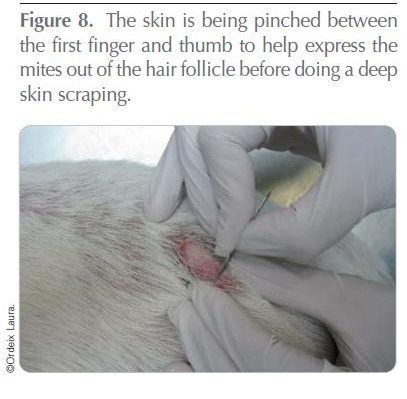 This technique is used to identify parasites in the hair follicle such as Demodex canis. It is considered the test of choice to confirm or rule out the presence of demodicosis. The area to be sampled is prepared the same way as described for superficial scrapes, and the material used is also the same. The most significant differences in this technique are as follows:

• The sampling area is smaller than for a superficial scrape.

• It is recommended to pinch the skin between your first finger and thumb to help express the mites out of the hair follicle (Figure 8).

• The area should be scraped until there is mild capillary bleeding. This shows that the epidermis has been removed and the dermis is being scraped.

This test is used to identify Demodex canis and dermatophytes, and to assess hair shaft morphology.

The plucked hair test is considered as being less sensitive than deep scrapes in the diagnosis of demodicosis, especially in localised cases and when there are no complications from secondary pyoderma. However, it is particularly indicated for the assessment of areas where it is harder to perform deep skin scrapings (e.g. periocular or perioral areas, interdigital spaces and perineal area).

Tips for performing this test successfully and for increasing diagnostic sensitivity:

• Use the curved haemostatic forceps to firmly grip a group of hairs at their base - no more than 5-10 at a time - and then gently pull out the hairs in the direction of hair growth. Pull slowly and continuously to ensure that the peripilar keratin is removed together with the hair, because this is where the parasite is located (Figures 9 and 10).

• Take a good number of samples.

• In order not to break or deform the hair at the point of contact with the forceps, you may pluck out the hair with your fingers or with rubber-tipped forceps. This is especially useful if the aim of the microscopic examination is to diagnose changes in hair shaft morphology.

• After plucking out the hairs, place them in the mineral oil on a slide, carefully positioning them in parallel in order to examine them more easily.

This technique is mainly used to detect parasites that move on the skin surface, especially Cheyletiella spp. It is also particularly useful for showing the owner the fleas or lice that are infesting his/her pet, because the parasites get trapped on the tape.

The procedure consists of using a piece of transparent adhesive tape to collect scales attached to the animal's skin and/or hair, brushing the hair beforehand in order to loosen the scales. Any scales that have fallen off onto the examination table can also be analysed. The tape should then be carefully stuck onto the slide, trying to avoid creases, and then it can be observed under the microscope.

D) Examination of the sample

An alternative to liquid paraffin is 10% potassium hydroxide (10% KOH). It dissolves the scales in the sample and improves visibility. However, unlike the oils, it kills the parasites and so they can be overlooked as they will no longer be mobile. The use of KOH is mainly recommended to identify dermatophytes, because it is easier to differentiate the spores from peripilar keratin on the hair shaft.

After preparing the slides with the samples collected using the techniques described above, the samples are covered with a cover glass (slide) (except in the case of the adhesive test tape) to improve quality of vision and are carefully examined under a microscope.

Care should be taken to partly close the microscope diaphragm, as this will reduce the amount of light and increase the contrast (too much light can reduce sensitivity because the mites become almost transparent and invisible (Figures 11a and b).

No mites should be found in healthy animal samples. This is particularly true for superficial mites, when the presence of even a single adult mite or a single egg of Sarcoptes or Cheyletiella is considered to be diagnostic of the disease (Figure 12). However, the presence of a single specimen of Demodex makes the diagnosis questionable. Although Demodex canis may inhabit the skin of healthy dogs, the probability of finding them by chance is very low (5.4% of healthy dogs may have Demodex canis in a microscopic hair examination). Therefore, the finding of a single mite could suggest the presence of demodicosis and it warrants further deep scrapes or microscopic hair examinations (Figure 13). Rarely, a longer form of Demodex, namely Demodex injai, might be observed on the skin surface of dogs, especially on the dorsal surface of allergic Terriers (Figure 14).

Occasionally, macroconidia from ambient saprophytic fungi, pollen or pieces of tissue fibres may be observed in the lesion samples as a result of ambient contamination.

This article was kindly provided by Royal Canin.  If you would like printed copies of this material or other Focus publications please contact your Veterinary Business Manager:

This article was previously published in 2013.