Diagnosis of pruritus in the dog

Diagnosis of pruritus in the dog 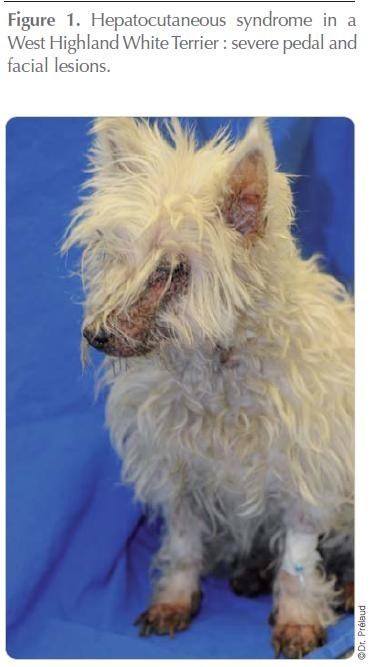 An 11-year-old West Highland White Terrier was presented for severe pruritic and painful dermatitis which began two months earlier with foot pads licking and lameness. This dog has no previous history of dermatological problems (Figure 1).

Through this short history what is the main differential? :

The breed, age and description of lesion tended to minimize the allergic hypothesis. First line diagnostic tests were biochemistry, skin biopsies and ultrasound.

An owner called the clinic for his 1.5-year-old Cavalier King Charles which was scratching its neck when the lead or leash was pulled. This short description leads already to one differential:

Breed, location of lesion and description of severe pruritus were highly suggestive of syringomyelia.

A 1-year-old French bulldog is presented for feet licking and recurrent otitis both steroid responsive (Figure 3). What is your first differential?

This history includes 3 major diagnostic criteria of canine atopic dermatitis, therefore it will probably be the first hypothesis.

If the pruritus is associated with skin lesions, the potential causes are far more varied and localisation alone is not always enough to narrow down the differential diagnosis.

Identifying the type of lesions is the first essential step. If the lesions are nodular or ulcerated (Figures 4 and 5), cytology and histopathology are always indicated as a first line examination. Such examinations could be considered in first line in elderly animals with erythematous or scaly labial or trunk lesions to eliminate the hypothesis of cutaneous-mucosal lymphoma (Figure 7).

In other cases (erythema, papules, scales, crusts etc.) the diagnostic work-up involves looking for the three main causes of pruritus: infection, ectoparasites, and allergy. Unlike the commonly held belief, allergy tests are of no help in such cases.

The first step is to take skin scrapes and perform surface cytology. 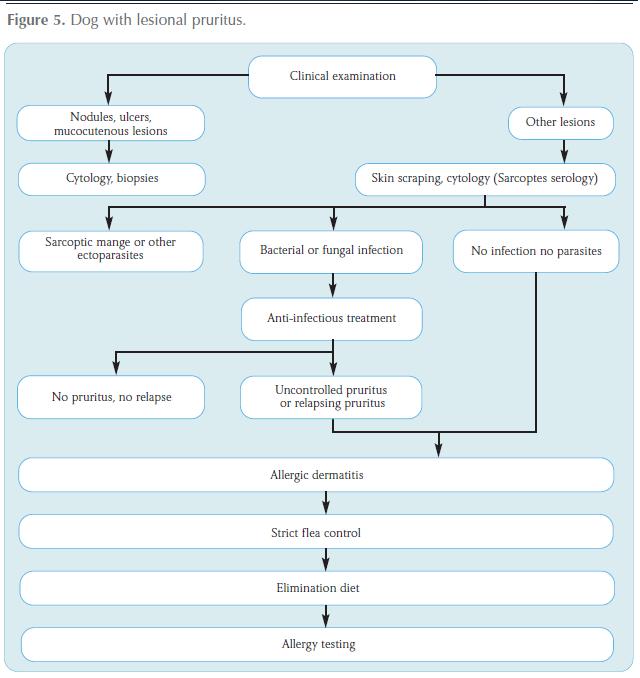 If ectoparasites are found (fleas, Sarcoptes, Demodex, Cheyletiella spp., Neotrombicula autumnalis, etc.), appropriate treatment should be given and the animal reassessed 3 to 4 weeks later. If you don't find them, a diagnostic therapy can be considered.

B) Strong suspicion of mange

Even if the parasite is not found on direct examinations, Sarcoptic mange cannot be ruled out, especially if the distribution of pruritus is highly suggestive: external aspect of the elbows, ear pinna, face. Serological testing can be useful in such cases to confirm the diagnosis. If this is not available, a therapeutic trial can be instigated (e.g. selamectin/10 days, moxidectin spot on, milbemycin oxime per os, amitraz lotion).

If a superficial pyoderma or Malassezia dermatitis is diagnosed, it should be treated to determine whether it is the cause of the pruritus or if pruritus persists once the dermatitis has resolved. The animal should therefore be reassessed 2 to 3 weeks after appropriate anti-microbial treatment.

D) Absence of infection or ectoparasites

In the absence of infection or ectoparasites, or if the pruritus persists once the infection is under control, an allergic origin should be considered. The diagnosis of flea allergy dermatitis relies on the observation of lesions or pruritus in the dorsolumbar region, whilst atopic dermatitis is associated with various specific epidemiological and clinical criteria (Table 1).

The other cases are likely to be suffering from an atypical allergic dermatitis, in which the allergen may be food or airborne allergens.

The first step is therefore to instigate rigorous antiparasitic treatment and control of secondary infections to narrow the differential diagnosis and limit secondary causes of pruritus. If there is no response to this treatment, an elimination diet is implemented over a period of at least one month (ideally 8 weeks).

Allergy tests are only indicated to obtain an aetiological diagnosis for atopic dermatitis and select an appropriate desensitisation programme.

Therefore the diagnosis of allergic dermatitis is mainly made by elimination of ectoparasite cause of pruritus and observation of criteria obtained from history and clinical examination without allergy testing. This concept which is largely used in human medicine is now more and more widely used in canine dermatology. 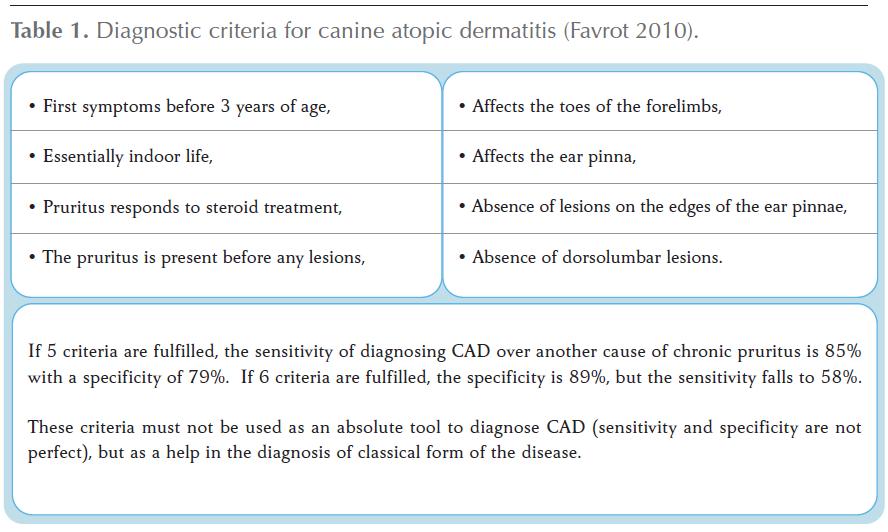 The principal causes of pruritus that starts before the onset of lesions are summarised in Table 1. The first step is to determine the localisation of the pruritus as this often provides a valuable diagnostic clue (Table 2). It is also important to take a detailed history from the owner. These initial observations will guide the choice of further diagnostic tests such as skin scrapes, cytology, serology for scabies, and in many cases of cervical pruritus or of the extremities, a neurological examination combined with an EMG (pruritus of the extremities of the limbs) or MRI (suspicion of syringomyelia). 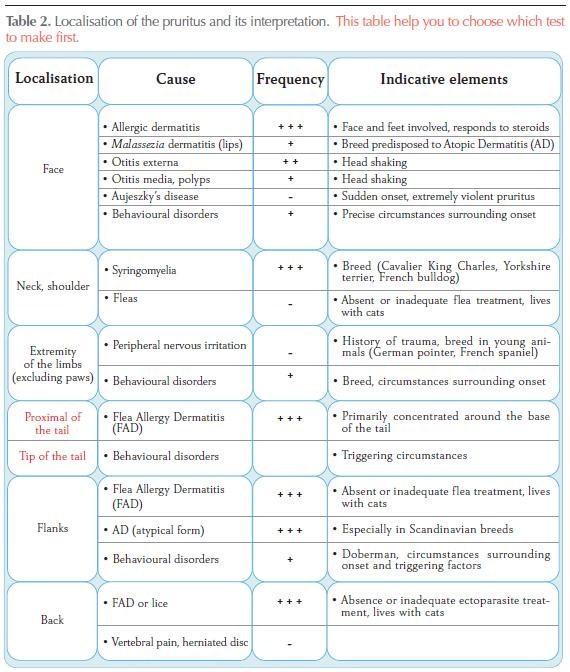 Although in dermatology, pattern recognition is rare, some disease make exception, but you should work out a diagnosis. Certain symptoms or lesion distribution patterns are highly suggestive of specific causes of pruritus. The most common examples are:

• Pruritus of the shoulder or neck in a Cavalier King Charles: syringomyelia,

• Hyperhidrosis (excessive sweating in the absence of stress): atopic dermatitis,

• Licking and chewing the tip of the tail: behavioural disorder,

• Crusty, pruritic lesions on the free margin of the ear pinnae: sarcoptic mange.

This article was kindly provided by Royal Canin, makers of a range of veterinary hypoallergenic diets for dogs and cats. For the full range please visit www.RoyalCanin.co.uk or speak to your Veterinary Business Manager: