Thoraco-lumbar herniated intervertebral disks are the most frequent type I hernias. In contrast to the pain associated with cervical hernias, they are associated with serious neurological deficits because they bring about more serious medullary damage that requires quick decompression. Seventy five percent of hernias occur between T11 and L2. The disks T12/T13 and T13/L1 are the most commonly affected (Figure 10 ) (45% of cases). They can appear from the age of one but are most likely to appear between 3 and 5 years old. Chondrodystrophic breeds (Dachshund, Shi Tzu, Bulldog) are most affected.

The presence of a neurological deficit, even a slight one, means that surgery is recommended. Neurological signs are most commonly a proprioceptive defect of the back legs on a mobile dog (stage 2). Surgery is required because it is a sign of medullary damage that is likely to become worse at any moment. Stage 3 (ambulatory paraplegia) and stage 4 (non ambulatory paraplegia) are conditions that have a good to excellent prognosis after surgery. For cases in which there is loss of sensation (stage 5) (Figure 11), the prognosis is very reserved and is practically a contraindication for surgery. The development time for clinical signs (from a few seconds to a few hours), the degree and the extent of the compression (slight compression or on the other hand major compression at several levels), the pre-operation appearance of the spinal cord (myelomalacy or lack of hematoma) as well as the delay before surgery (from a few hours to over 48 hours) are factors that allow one to adapt the prognosis of stage 5 patients. Statistically, 30 to 50% of animals operated within a period of 48 hours recover ambulatory functions.

1. The animal is positioned in lateral or ventral recumbency. 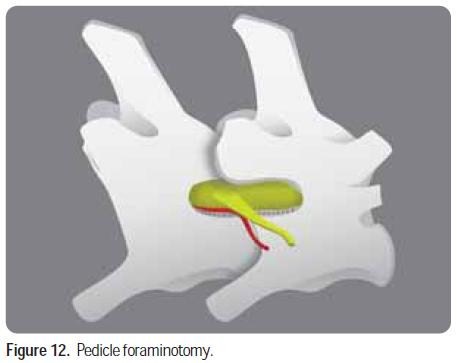 2. Cutaneous incision along the median line of the back, then lumbodorsal fascia incision along the spinal area then periosteum elevation of the paravertebral muscles. Removing the inserted tendon on the articulary process allows one to visualize the lateral side of the disk anulus. The diskectomy is performed using a number 11 blade.

3. Opening the vertebral canal is made using a bur by foramino-pediculectomy centered on the accessory process that is resected, the articular process being conserved (Figure 12). If the bone window that has been created is too narrow to allow for satisfactory decompression as well as the complete removal of disk material, the articular process is sacrificed. The extraction of disk material is made using a micro-spatula and a suction cannula.

4. Closure is made plane by plane making a continuous suture on the paraspinal muscles subcutaneously and cutaneously.

5. After the operation it is best to manage pain by using a combination of corticosteroids (pred-nisone 0.5 mg/kg in two doses) and morphine (morphine chlorohydrate: 0.3 mg/kg sc 2 to 3 times/ day). Miction should be monitored because urinary retention is frequent. It may be necessary to use alpha 1 antagonists. After a week of rest, physiotherapy should be carried out to promote recovery. 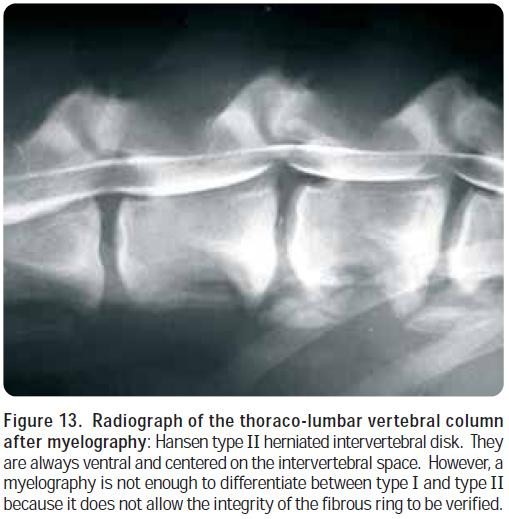 Type II HIVD associated degenerative myelopathy that develops over several months. They are not painful. The average age when the first signs appear is 8 years old and the German Shepherd is the most affected breed (Figure 13).

Treating HIVD II is difficult due to the very dense or indeed calcified consistency of the disk material and the vulnerability of the degenerated superjacent spinal cord. Surgical treatment consists in extracting disk material by lateral corpectomy. The principle of the lateral corpectomy is to create a cavity ventral to the spinal cord centered on the intervertebral space into which the herniated disk will collapse (Figure 2). The advantage of this approach is to create wide exposure and complete decompression whilst limiting risks of medullary trauma.

The presence of slight ataxia associated or not with proprioceptive regression should be a reason for carrying out this surgery.

The prognosis after surgical intervention is good for 93% of dogs.

1. The patient lies in lateral recumbency.

2. The approach path is the same as that described for type I HID.

4. The lateral corpectomy starts by incising the lateral portion of the anulus. The disk is then partially excised with disk forceps. The intervertebral area is enlarged to the adjacent bodies of vertebrae cranial and caudal direction using a bur. Thus, an open cavity is created laterally. The dorsal cortical bone of each vertebra is progressively thinned until it is possible to cave this wall into the cavity using a spatula slid along the ventral side of the dura mater. This spatula should be moved without mobilizing the spinal cord.

5. Post operative care is carried out as described previously. Analgesic medication and rest for 3 weeks is prescribed followed by physiotherapy.

These are nearly always Hansen type II and do not cause a medullary syndrome but a radicular one often accompanied by pain. Confirmation of involvement of the hernia in the neurological syndrome observed implies, in theory, coherence between the clinical signs (signs of radicular suffering), imaging (disk-root conflict) and the electromyography (modification of the speed of nerve conduction and electromyographic signs of denervation in the areas concerned). The prognosis after surgery is good. These hernias are situated in a median or lateromedian position.

Surgical treatment is based on a classical dorsal approach by laminectomy

1. The dog lies in ventral recumbency, held perfectly straight by adhesive straps. There are no cushions under the stomach to avoid abdominal overpressure likely to worsen bleeding.

3. A bone window is made using a bur or bone forceps. It is centered on the lumbo-sacral inter-arc space and extends cranial to the middle of L7 and caudal to space S2-S3. Its medio-lateral limits are defined by articular processes that should be maintained because at this level they play an important mechanical role. The opening of the canal starts by resectioning the interarc ligament. Removal of the internal cortical bone is made using a Kerrisson rongeur. Exploration of the canal allows the compressed root(s) to be seen and the hernia to be treated. If necessary, the roots are delicately folded back in order to see the disk.

4. The diskectomy is made using a number 11 blade and removal of the diskal material is made using disk forceps and an angled curette. After diskectomy, the roots are more mobile, a sign of good decompression. Classical closure is made plane by plane.

5. Post operative care is identical to that for the lateral corpectomy as described previously.

Foraminal or extraforaminal herniated intervertebral L7 disks require a complex approach. Treating them by a conventional approach is either incomplete or destabilizing because it requires resectioning an articular process. In the latter case, instruments are required that allow one to carry out lumbosacral arthrodesis (Figures 14 and 15).

Today, disk surgery is a well documented type of surgery. Its recent advances have been obtained due to, in particular, the progress of imaging (CT or MRI) that allows the areas and the type of compression to be precisely located.

Click here to read Part 1!
This article was kindly provided by Royal Canin, makers of a range of veterinary diets for dogs and cats. For the full range please visit www.RoyalCanin.co.uk or speak to your Veterinary Business Manager: