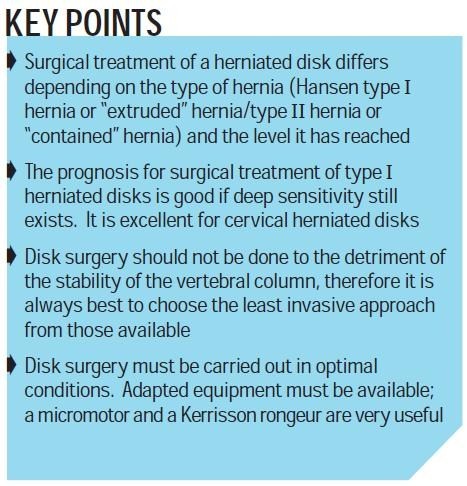 In veterinary medicine, intervertebral disk surgery is limited to the herniated intervertebral disk which may be situated at any level of the vertebral column, with surgical treatment differing according to the level. At the cervical level of the vertebral column, a ventral corpectomy is the technique of choice as the hernia is most often ventral. When the hernia is lateralized, a hemilaminectomy is more suitable. Thoraco-lumbar herniated intervertebral disks are nearly always ventral or ventrolateral and their treatment is based on a lateral approach. If it is a Hansen type I (Figure 1), a foramino-pediclectomy is preferably chosen over a hemilaminectomy. This is more destabilizing as an articular process has to be sacrificed. If it is a type II, a lateral corpectomy (Figure 2) is preferred. Finally, a lumbo-sacral hernia requires a classical dorsal approach by laminectomy except if it is foraminal or extra-foraminal. In these two particular cases, a transiliac technique, endoscope assisted or not, is effective. 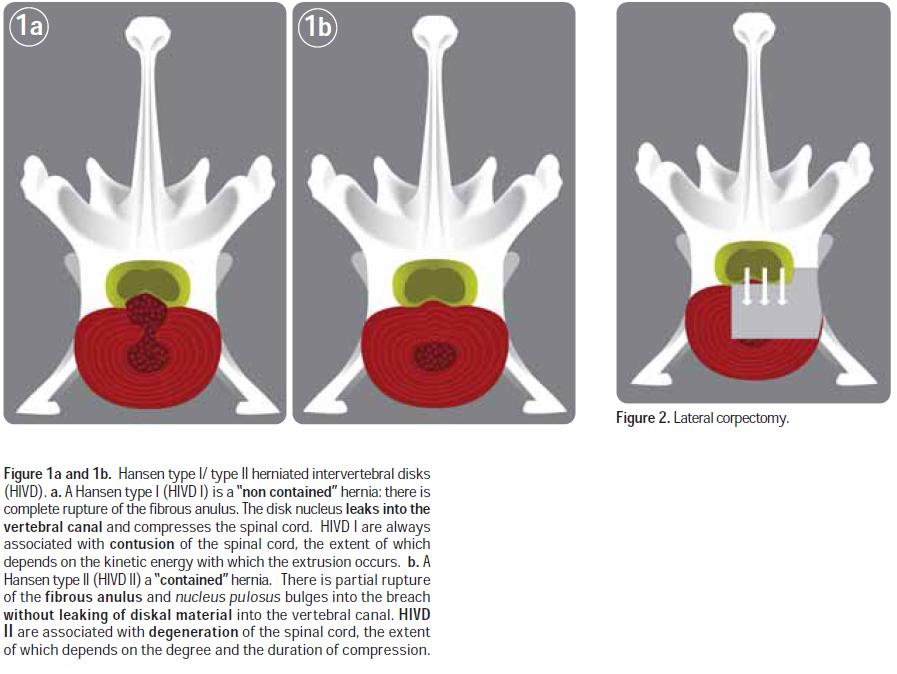 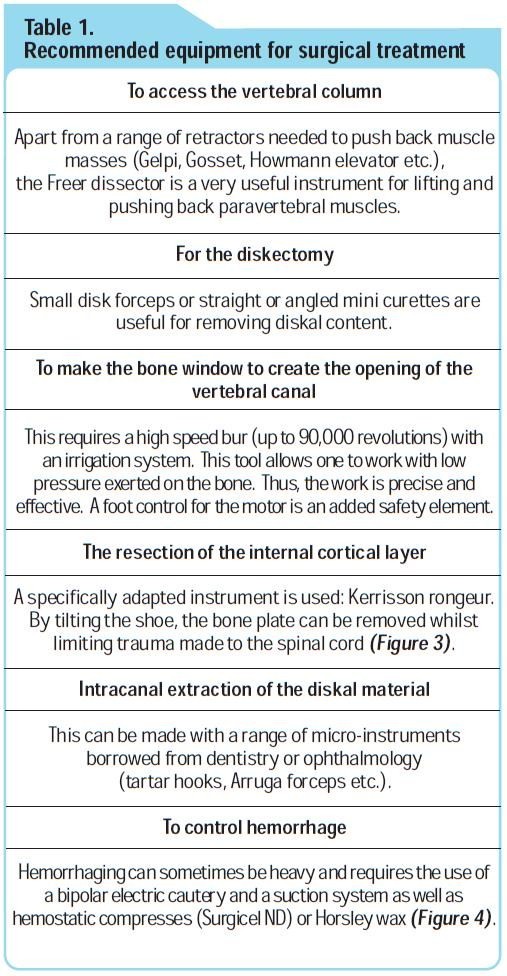 Surgical treatment of a herniated intervertebral disk should be made in conditions that are optimal for the surgeon and the animal. This means having adapted equipment to make access to the vertebral artery canal easier, making an atraumatic opening of the vertebral canal and controlling bleeding (Table 1).

The choice of the technique used to treat hernias is critical because it determines the quality of the result. Amongst the different techniques, you should always choose the one:

- that allows one to completely remove the herniated material, an important condition for good functional recuperation

- that best respects nerve tissue. It should allow one to remove the herniated material without causing extra trauma on the nerve. In particular, the surgeon should avoid direct or indirect contact with nervous tissue;

- that is the least invasive. By focusing on miniapproaches both to access the vertebral column (preservation of the musculature) and to access the disk material (limited canal opening), functional recuperation will be faster; 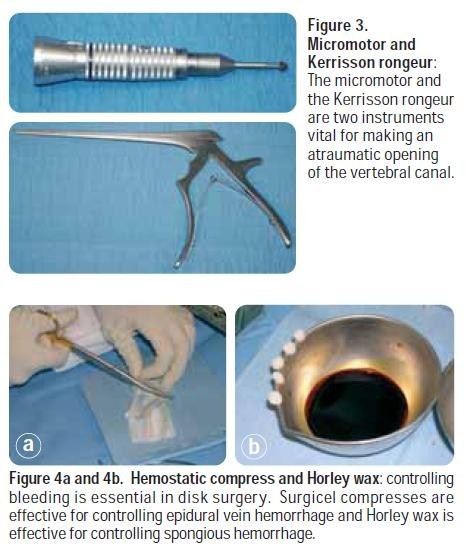 Hansen type I cervical herniated intervertebral disks are the source of more or less severe neck pain. They are rarely associated with paralysis. The neurological deficit that is most often seen is paresthesia in one of the front legs. Type I cervical HIVD is generally found in animals over 6 years old. The disk that is most often affected is the one that separates the second from the third cervical vertebra (C2-C3) (Figure 5). HIVD I are always ventral or very slightly lateralized.

Surgery is recommended when medical treatment fails or cervical pain systematically recurs after stopping treatment. The presence of neurological signs (paresthesia in front legs) or a clinical presentation indicating worsening of the condition also justifies an intervention.

The prognosis after intervention is excellent. Recuperation is complete and fast (within 48 hours) in all neck pain animals whether they have a minor nerve deficit or not.

The surgical treatment is a ventral corpectomy centered on the herniated disk. 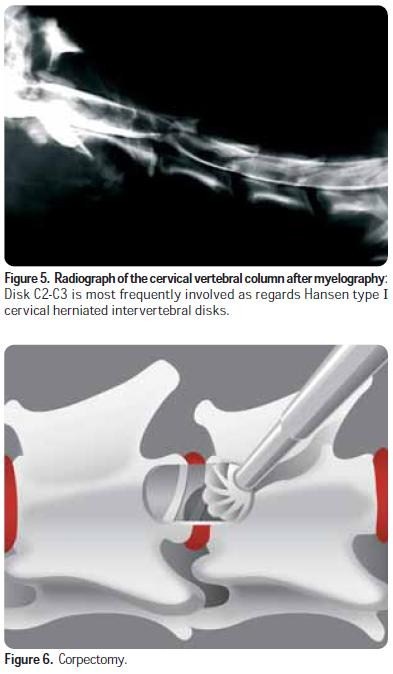 1. The animal is placed in a dorsal recumbency, the neck is held extended, perfectly aligned with the rest of the body. The head is fixed to the table by adhesive straps and the front legs are fixed extended backwards.

2. The cutaneous incision is centered on the intervertebral area to be operated and is extended to two bodies of vertebrae rostrocaudally. After separating the sterno-hyoidien muscles, the trachea-esophagus block is drawn back on one side and the vascular-nerve “package” (vagus nerve and carotid) on the other. Take note of the recurrent laryngeal nerve associated with the trachea in order to be able to preserve it. This approach allows one to uncover the long muscles of the neck that are removed from the ventral tubercle of the disk space to be operated. This allows one to uncover the ventral surface of the anulus of the disk concerned. It is located caudally using a C6 transverse process and rostrally using a ventral tubercle of the atlas vertebra.

3. The opening of the vertebral canal starts by incision of the ventral side of the anulus using a number 11 blade. The diskectomy is made using disk forceps. The corpectomy (Figure 6) is made using a bur to create a slot centered on the hollowed intervertebral space. The width of the slot should not exceed a third of the width of the body of the vertebra and the length of it, a third of the length of the body of the vertebra and the intervertebral space, otherwise there is a risk of post-operative vertebral instability. Moreover, the axis of the slot should follow the slant of the disk. The opening of the canal is made using a Kerrisson taking care to remain exactly in the median axis otherwise there is a risk of starting serious hemorrhaging of the epidural veins. The extraction of the herniated disk material is made using a foam hook. 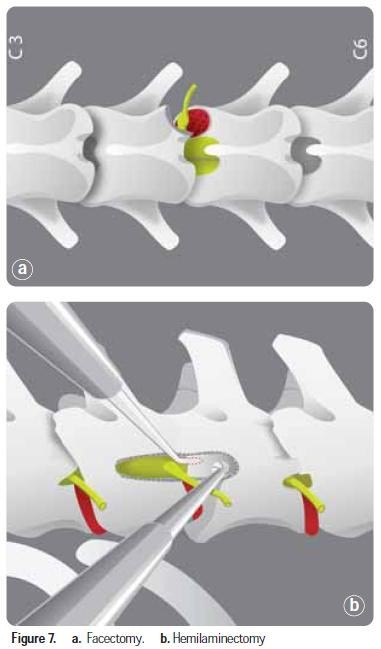 4. Closure is made in the classical way, plane by plane.

5. Post-operative care is as normal. For mobile animals recuperation is fast (12 to 24 hours) but activity should be limited to toilet walks for 3 weeks. The dog should be on the leash and a harness should be used instead of a collar. For bedridden dogs, nursing care is continued until functional recuperation is achieved. Short term corticotherapy can be useful to limit edema and pain.

Lateralized cervical herniated intervertebral disk. In the rare case that the hernia is lateralized or forminal, a hemilaminectomy is required. The approach to the vertebral column is dorsal from the median plane or dorso-lateral. Access to the disk material is possible after facectomy (Figure 7a) of the area concerned.

Type II HIVD are frequent in the cervical area. Doberman, Labrador and Bernese Mountain dog breeds are most often affected but they also frequently occur in small breeds such as the Yorkshire Terrier. When they are symptomatic they are the cause of degenerative myelopathy, the clinical signs of which are identical to those described for Wobbler syndrome. The disk between C6 and C7 is most often involved (Figure 8). Surgical treatment is made by corpectomy in the same way as that described for HIVD I except that it is generally associated with intervertebral arthrodesis (Figure 9). The prognosis is reserved. 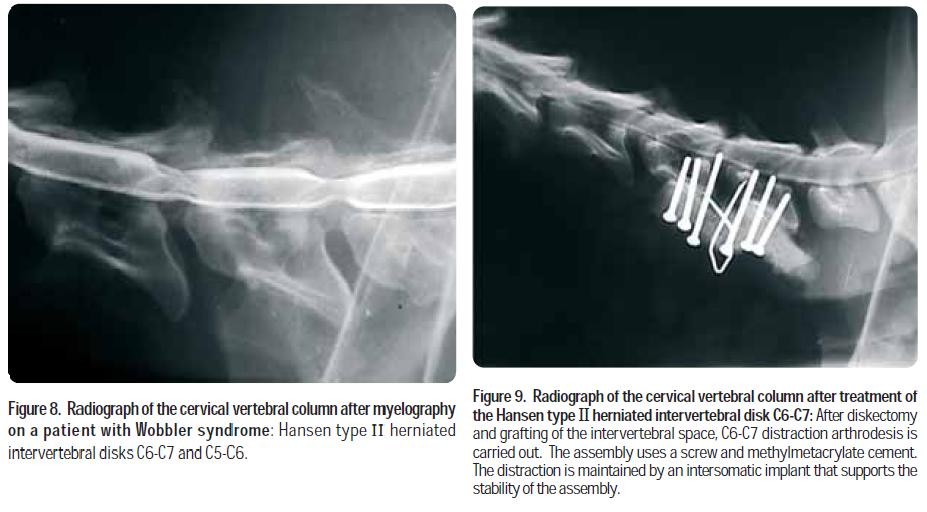 Come back next week for Part 2!
This article was kindly provided by Royal Canin, makers of a range of veterinary diets for dogs and cats. For the full range please visit www.RoyalCanin.co.uk or speak to your Veterinary Business Manager: