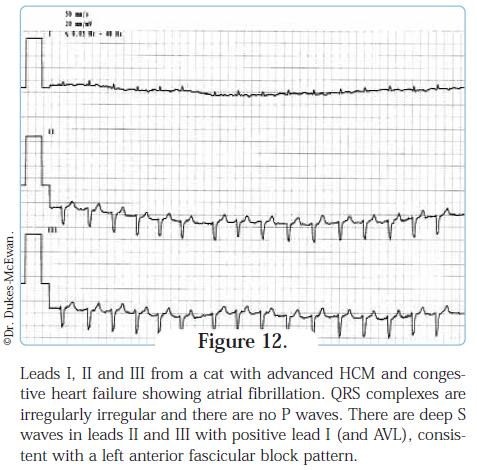 Atrial fibrillation (AF) occurs because of atrial stretch (Figure 12). Whether atrial fibrillation is able to develop and become sustained depends on atrial mass, so cats, with small body size, are much less likely to develop AF than larger animals and therefore the presence of AF normally indicates advanced heart disease and severe atrial dilation (14). It is therefore considered to be a poor prognostic indicator in this species. In humans, AF is associated with risk of thrombus formation and thromboembolic stroke. In cats, atrial dilatation and spontaneous echo contrast (“smoke”) has been associated with arterial thromboembolism and it is likely that concurrent atrial fibrillation exacerbates this risk.

Supraventricular (atrial) premature complexes may occur with less severe atrial stretch (Figure 13), but their presence may herald the future development of AF.

The presence of arrhythmias or a history of syncope are negative prognostic factors in feline HCM (16). Finally, the progression of heart disease can result in histological changes of the myocardium, such as myocardial fibrosis. In arrhythmogenic right ventricular cardiomyopathy (ARVC), there is a marked fat or fibrofatty infiltrate into the myocardium; a change of substrate resulting in malignant ventricular  arrhythmias (17).

Some cats with cardiac disease, particularly cardiomyopathies, may show bradyarrhythmias. Although not clinically relevant on its own, an ECG diagnosis of 1st degree atrioventricular (AV) block in myocardial disease is not uncommon. Second and third degree AV blocks are often not clinically significant as cats have a high escape rate (e.g. 100-120 bpm) and compensate for any bradyarrhythmia (18). Furthermore, they may be transient arrhythmias, and recognition may depend on device monitoring (7). AV blocks may be associated with HCM if there is gross fibrosis around the AV node and conduction system (19) (Figure 16). Note that many cats with symptomatic third degree AV blocks may present with seizures rather than a classic flaccid syncope (20). AV blocks may also be identified in the absence of any other recognized structural or functional heart disease, i.e. idiopathic cases.

An important cause of a bradyarrhythmia, which is vital to recognize promptly, is hyperkalemia. On ECG, there may be no evidence of atrial activity (atrial standstill; no visible P waves) and tall spiky T waves. QRS complexes may become wide. Hyperkalemia can be a consequence of urinary tract obstruction or anuric acute renal failure. Sepsis, hypoglycemia and intoxications may also result in bradycardia or bradyarrhythmias.

It is unusual for a cat to show sinus arrhythmia in a consulting room situation or during an ECG recording (Figure 17). If sinus arrhythmia is detected, it is important to exclude causes of high vagal tone, such as feline asthma and other thoracic, abdominal or ocular disease.

If arrhythmias are suspected to be due to systemic diseases, other additional investigations warranted include total T4 (in cats > 7 years of age), blood pressure measurement, routine hematology and biochemistry to check for other dysfunction, and abdominal ultrasound.

In cats, arrhythmias are most commonly secondary to either cardiac or systemic disease. The most important treatment of the arrhythmia is therefore to recognize and treat the underlying condition; optimize CHF treatment in a case with known cardiac disease; and correct the systemic or metabolic disturbance.

If the arrhythmia is not hemodynamically significant (e.g. a cat with occasional single, uniform VPCs with HCM but no exercise intolerance or collapse), no further action may be required other than treating the CHF. It should be appreciated that antiarrhythmic drugs are not benign, and they have the potential, difficult to predict in an individual animal, to be pro-arrhythmic. Some anti-arrhythmic drugs which the author has used for feline arrhythmias are listed in Table 1.

For cats which are symptomatic due to bradyarrhythmias such as 3rd degree AV block, the treatment of choice is a pacemaker. Transvenous leads (via the jugular) are usually avoided in cats, because of the risk of cranial vena cava obstruction and chylothorax. Leads are therefore placed epicardially, with the pulse generator in the abdominal wall musculature and the lead passed transdiaphragmatically and attached to the epicardium through a pericardial incision (Figure 18). The beta-2 agonist terbutaline can be tried which may have a positive chronotropic and dromotropic effect for symptomatic bradyarrythmias. 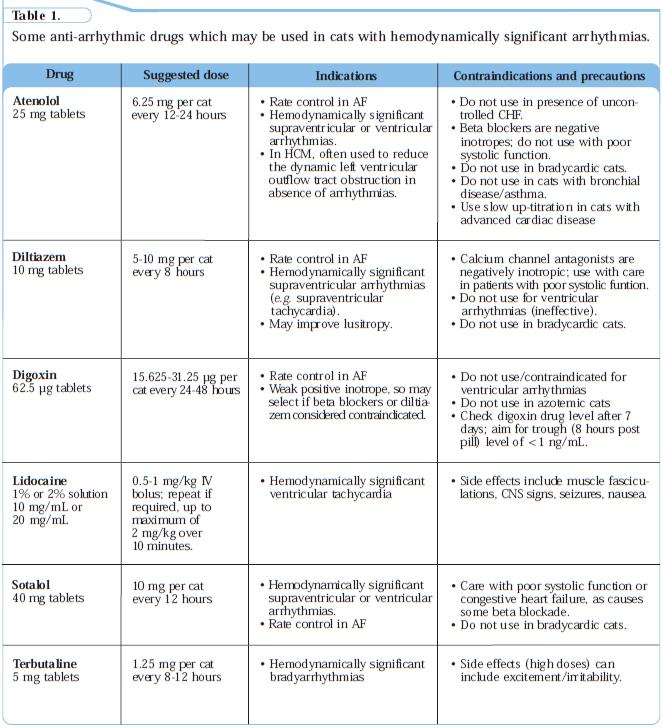 Dysrhythmias in cats normally indicate the presence of cardiac disease although systemic conditions may also result in tachyarrhythmias or bradyarrhythmias (most importantly, hyperkalemia). Cats with significant myocardial disease may have no arrhythmia or other auscultatory abnormality on clinical examination so other investigations are warranted to identify cardiac disease and any arrhythmia. Myocardial infarction is likely an under-recognized consequence of feline myocardial disease. Hemodynamically significant arrhythmias which are transient may result in episodic seizure-like episodes rather than syncope.

This article was previously published on VetGrad.co.uk in 2012.