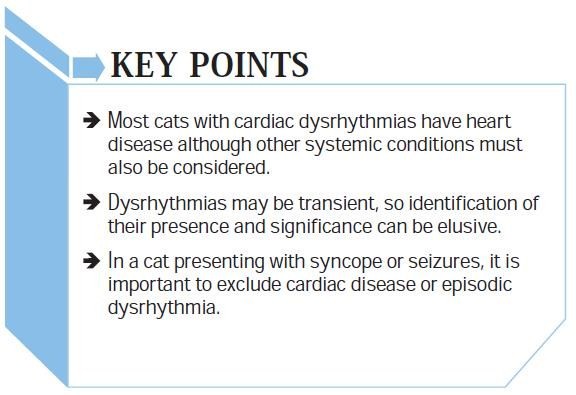 A dysrhythmia is literally an abnormal or disordered heart rhythm; the term arrhythmia (the lack of normal regular rhythm) is used synonymously in cardiology. Dysrhythmias in cats are a less common primary reason for presentation to veterinarians than dysrhythmias in dogs. The smaller heart size may protect against some hemodynamically significant tachyarrhythmias, and cats, with their inherently relaxed lifestyle, are well able to mask serious arrhythmias or severe heart disease. However, if dysrhythmias are identified, further investigations are warranted, since most cats with dysrhythmias have primary cardiac disease, commonly a primary or secondary cardiomyopathy. Syncope in cats is much less common than in dogs. Seizure activity is a common sequel to syncope so it may be more difficult to distinguish between neurological and cardiac causes of Clinical signs in cats than in dogs. Electrolyte disturbancesmay also be responsible for arrhythmias. In this article, the approach to the feline patient with suspected or identified dysrhythmia and the methods of confirming the diagnosis and treatments are reviewed.

Identification of an arrhythmia is much more likely to be an incidental finding during the clinical examination, rather than in a cat with a history of exercise intolerance or collapse. The owner may well present the cat because of other clinical signs, referable to primary or secondary cardiac disease (e.g. dyspnea, open-mouth breathing) or systemic conditions (e.g. signs of hyperthyroidism or systemic hypertension, stranguria or oliguria). On clinical examination, from careful auscultation, note the following:

• Heart rate and rhythm: heart rate is less useful than in dogs for suggesting congestive heart failure (CHF), as some cats in CHF have sinus bradycardia. Sinus arrhythmia, while possible in relaxed cats at home as identified from Holter monitoring (1), should be regarded with suspicion during a consultation, as it may indicate elevated vagal tone due to respiratory or other pathology. Tachycardia may merely reflect the stressed state of the cat, but tachyarrhythmias should be investigated fully. Premature beats are often quieter than the normal heart sounds, and the clinician is often more aware of the pause following this beat. It is useful to simultaneously palpate the femoral pulse. Pulse deficits are audible heart sounds without a corresponding pulse, and are a common finding in tachyarrhythmias.

• Auscultation abnormalities: heart murmurs should be noted. They may reflect the presence of congenital or acquired myocardial disease. A murmur is most common in hypertrophic (obstructive) cardiomyopathy (HOCM), and may vary in intensity depending on the cat’s state of stress or calmness. Absence of an audible heart murmur does not exclude significant myocardial disease (2). Diastolic gallops (audible third or fourth heart sounds) are abnormal in cats, and indicate impaired relaxation and/or decreased compliance of the left ventricle; their presence indicates diastolic dysfunction and actual or imminent decompensation into CHF. These sounds should not be confused with a dysrhythmia.

• Signs of congestive heart failure: left-sided CHF is manifested as pulmonary edema (mild tachypnea to overt dyspnea, with inspiratory crackles evident on auscultation of the lung field). Right-sided or biventricular failure signs in the cat may be more subtle than in the dog, and may be limited to distended jugular veins or a positive hepatojugular reflux. Pleural effusion is the most common manifestation of biventricular failure. Ascites is much less common in cats than in dogs with right sided CHF, but it can occur. Signs of forward heart failure include hypotension, hypothermia, weak peripheral pulses and pallor with slow capillary refill.

• The rest of the physical examination: hyperthyroidism is a relatively common cause of premature beats and secondary cardiomyopathy, and careful palpation of the neck is indicated. Cats appear to be less likely than dogs to show ventricular arrhythmias in association with systemic conditions such as abdominal pain, pancreatitis, intoxications etc., but may be more likely to show bradycardia or bradyarrhythmias (3,4) (Figure 1). Furthermore, in anuric or oliguric renal failure or urinary tract obstruction, hyperkalemia can result in bradycardia and other characteristic ECG findings (5). It is important that these signs are detected on initial clinical examination, and investigated further.

In the occasional cat with syncopal/seizure episodes, no abnormality of heart rate or rhythm may be evident at initial presentation, as dysrhythmias may be transient. 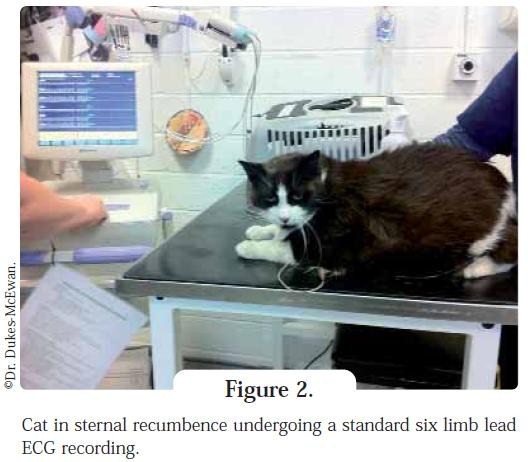 In a cat with an arrhythmia identified on auscultation, a standard 6 lead ECG is indicated to attempt to document this, to determine diagnosis and significance. Although right lateral recumbence is advocated for a standard ECG in a dog, many cats prefer to be in sternal recumbence, this limits patient stress. It has little effect on the measurements of the ECG (6) (Figure 2). Feline ECGs are more difficult to interpret than in dogs, because low voltage complexes are normal (Figure 3), and P and T waves can be difficult to discern, even though P wave identification is vital in interpreting the heart rhythm. It can be beneficial to increase sensitivity (e.g. 1 mV/20 mm) and use the fastest paper speed possible (usually 50 mm/s on most ECG machines). The normal low voltage of the feline ECG complexes means that the ECG can be adversely affected by noise, such as electrical interference, purring, trembling, etc. Every attempt should be made to get a clean baseline. Standard ECG 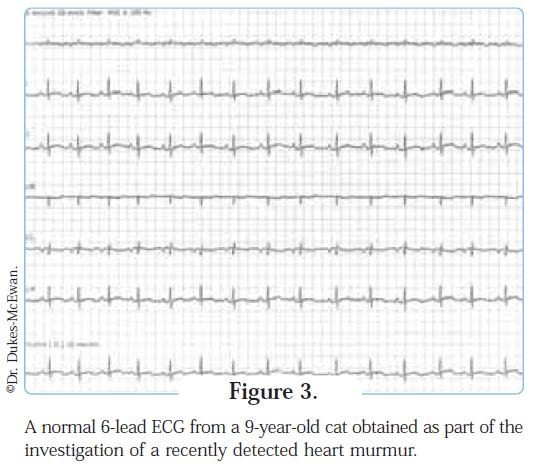 measurements of complex amplitudes and durations are from lead II, but any of the leads which optimize the P waves and QRS complexes can be used to assess rhythm.

In cats with heart disease but without a documented arrhythmia, the ECG may have conduction or other abnormalities suggestive of cardiac disease. Common intraventricular conduction disturbances include patterns consistent with left anterior fascicular block (Figure 4) and complete or incomplete right bundle branch block (Figure 5) or just notching of the QRS complexes. Although the ECG is an insensitive indicator of chamber enlargement in contrast to echocardiography, evidence of chamber enlargement can include tall R waves (left ventricular enlargement) and tall and/or wide P waves (atrial enlargement but not specific for right versus left or bi-atrial enlargement) (Figure 6). The ECG may also give evidence of myocardial hypoxia/ ischemia, 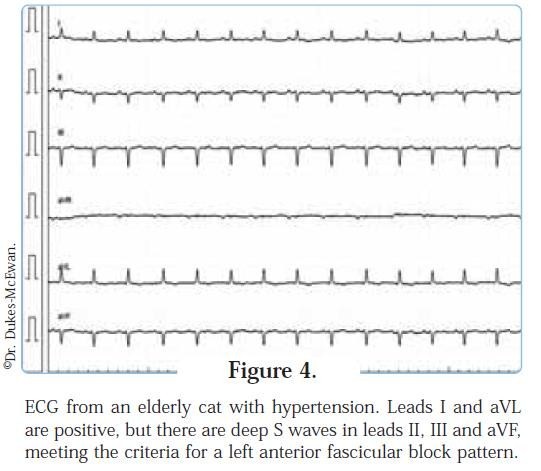 particularly with changes in the ST segment.

If the history suggests a transient arrhythmia is possible (e.g. episodic syncope/seizure events) or to further investigate the significance of arrhythmias identified during the clinical examination or on standard ECG, a 24 hour ECG recording can be obtained with a Holter device (7). Normally, cats will not tolerate the device worn bandaged to their bodies, but the ECG electrodes can be attached to the chest wall, secured with bandaging material, and the device and cable trailed beside the cat, while hospitalized (Figure 7). 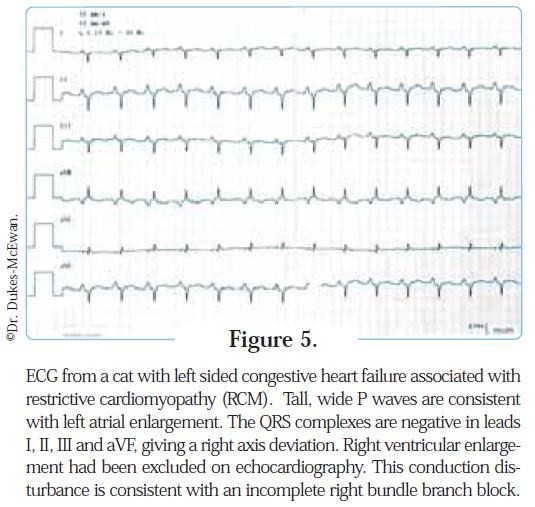 Event recorders are available and may be attached in a similar way to Holter monitors. These record a continuous loop of ECG (e.g. 3 minutes), but if an event is noted, and the record button activated, the ECG prior to, during and after the event can be saved (8). As with Holters, these external devices can encumber the cat and will therefore significantly impact on its normal behavior. An alternative is a commercial loop recorder device which can be implanted subcutaneously (requiring a brief general anesthetic); this means that the cat can behave completely normally and the device can be interrogated periodically or after an event via a programmer (9,10).

Other investigations of possible cardiac disease

Since arrhythmias in cats are commonly associated with structural heart disease, and some cardiac diseases may not have any auscultation abnormality, further investigations are warranted. These include: 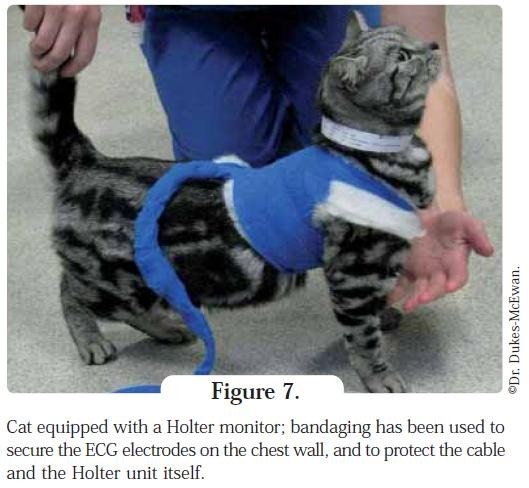 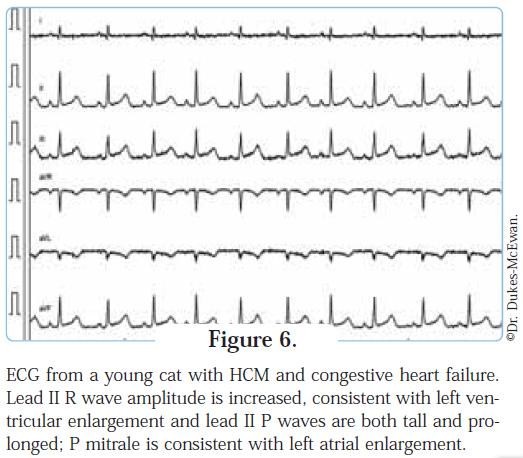 • Echocardiography: ultrasound is exquisitely sensitive for measurement of heart chambers and wall thickness, and to assess systolic function.  Any effusions (pleural or pericardial) are readily detected. Doppler echocardiography methods can be used to assess diastolic dysfunction and filling pressures in the heart (11). In addition, with very marked left atrial dilation and impaired atrial function, spontaneous echocontrast may be evident (“smoke”), or even overt thrombus material (Figure 8) indicating the cat is at risk of systemic thromboembolism. In the cat with hypertrophic cardiomyopathy (HCM), arteriosclerosis is present (12), and myocardial infarction can result. These cats may have ventricular arrhythmias and recent infarcts may be evident (Figure 9). Sometimes an old infarct is inferred by the presence of a very thin segment of left ventricular wall (often the base of the lateral wall) (Figure 10). In other cats, the impression of myocardial stunning, with very poor function and severe hypotension indicating cardiogenic shock, may be noted (Figure 11).

• Indirect blood pressure estimation (e.g. systolic blood pressure by the Doppler method). This is important to exclude hypotension, such as with cardiogenic shock with severe underlying cardiac disease, but also systemic hypertension, which can result in secondary cardiomyopathy.

• Thoracic radiography is more important to confirm the presence of pulmonary edema or pleural effusions when CHF is present.

• Cardiac biomarkers should also be assessed. 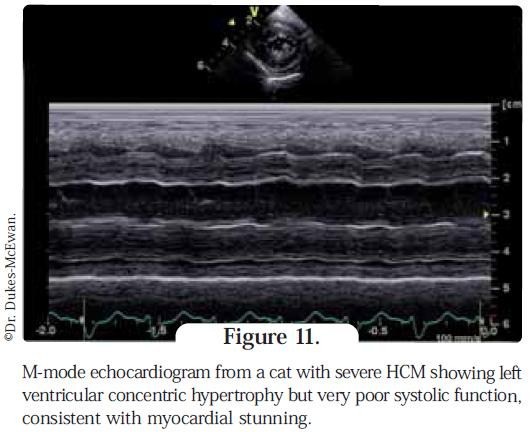 Cardiac troponin I levels are of prognostic significance and very high levels may indicate the presence of myocarditis or ischemia. However, cardiomyocyte damage may be the consequence of systemic disease, not just primary cardiac disease. NT pro-BNP levels are reliably high in cats with cardiomyopathy and have been proposed for screening for disease (13). However, renal insufficiency may also result in increased levels. 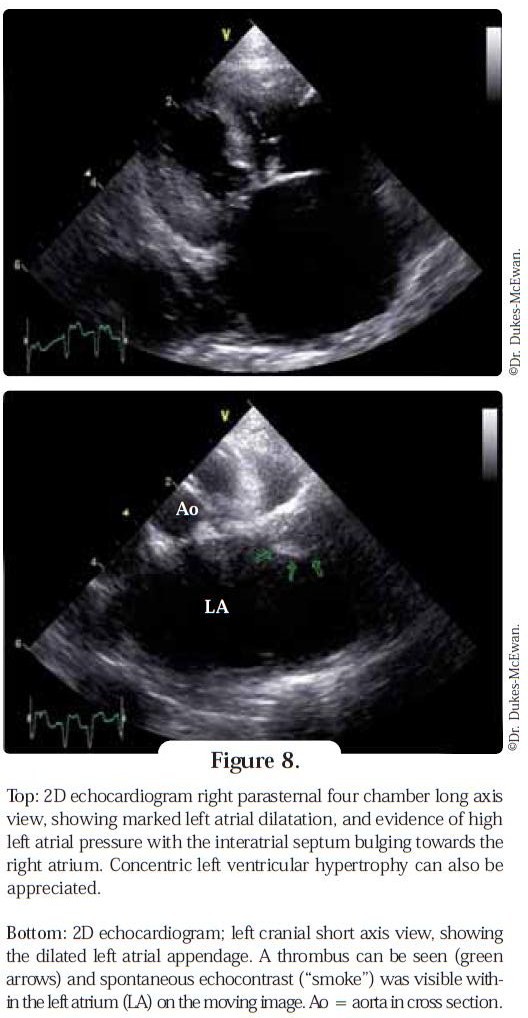 Come back next week for Part 2 covering causes and treatment!

This article was previously published on VetGrad.co.uk in 2012.