In my opinion urinalysis is the most important test to perform in geriatric animals, and a dip-stick test, specific gravity determination by refractometer, and microscopic examination of sediment are fairly cheap and quick to perform. Any abnormalities warrant further investigation.

Note many owners may fail to bring in a urine sample up to 27% in one study (Davies - unpublished data). In this study, which involved 107 animals, 18% showed no abnormal findings on dipstick analysis whilst a low positive protein content was found in 25% of samples; this was not regarded as being clinically significant because the samples were collected by free catch. However a further 11% did have significantly high levels of protein, and other abnormalities included the presence of glucose (3%), ketones (1%), and bilirubin (4%). 19% of samples produced positive leucocyte results but only 3% were corroborated by microscopic examination of urine sediment; similarly of 6% positive for blood only two-thirds of these had red cells present on microscopy. Urinalysis whilst conducting geriatric screens has stimulated further diagnostic tests which subsequent unmasking of various occult diseases including urinary tract infections/prostatitis, liver disease, chronic kidney disease, hydronephrosis and neoplasia.

For example, I have seen several patients with persistent hematuria which were subsequently scanned and found to have transition cell carcinomas (TCC) of the urinary bladder in the absence of signs typical of lower urinary tract obstruction (Figure 3). This raises a question; does TCC usually locate at the bladder neck, or do we only detect them when they do occur at this site because that is when clinical signs become evident?

Ideally a full hematology and biochemistry panel should be performed, but the cost of these can be a barrier for many owners. In my experience a single blood sample is not always that helpful and, for several reasons, may be confusing:

1. A single blood screen is of limited value as it only gives a snapshot of blood constituents at the time the sample is taken and, unless serially repeated, cannot be relied upon to represent the usual values to be found in the animal.

2. The chances of finding a relevant abnormal blood result in the absence of clinical signs identified from the history and physical examination are low (4).

3. For any given test one result outside the normal reference range can be expected to occur in 5% of normal animals so 1 in every 20 dogs or cats screened would have an abnormal result that is not relevant, and the chances of getting at least one false negative or positive result in a panel of 20 blood tests is 64% (5). So abnormal findings require repeat testing to confirm validity.

4. The cost of blood tests (including repeat tests to rule out false positive or negatives) would have to be borne by the client, and this may be a disincentive to enter pets into the screening program for people with limited disposable income.

Generally I prefer to run bloods as part of the screen only if indicated from the history or physical examination. The question may be posed; whilst you do not do routine blood tests as part of your initial screen, what tests should be included in a blood panel for an elderly patient if a blood test is to be performed? My answer is that the aim of a geriatric screen is to look for evidence of the common conditions that one might expect to find, so all the blood tests that are reliable, affordable and needed to help rule in or rule out the presence of common age-related diseases in that species/breed should be included. For example, if a clinician does not screen for T4 in dogs or cats then there is a failure to obtain information that might help towards confirming or excluding a thyroid problem even though a single result might not be that helpful, especially in dogs with hypothyroidism. A normal result might not rule something in or out, but an abnormal finding would at least prompt further investigations to evaluate its significance.

Screening thoracic radiographs have been recommended as part of a geriatric screening program, and in one study significant thoracic abnormalities including cardiac enlargement and lung disease were found in 17% of cats over 11 years of age and 4% of dogs over 7 years of age (8). Personally, I do not recommend chest radiographs unless indicated from the history and/or physical examination. Most animals require sedation to obtain good quality radiographs and the use of the common sedatives are not without potential complications in elderly patients. Acetylpromazine is a potent hypotensive agent and should be used with care, whilst medetomidine and dexmedetomidine are both contraindicated in animals with cardiac or respiratory disease - and their datasheets state that blood screening to rule out the presence of renal or hepatic disease is a prerequisite before they are administered to elderly animals.

Blood pressure monitoring, intraocular pressures, retinal imaging and other investigations can all add valuable information about the animal, but for routine screening they can be time-consuming and add considerably to the cost if free screening is not being offered. I am currently evaluating the value of some of these modalities to see if their inclusion in routine screening can be justified. 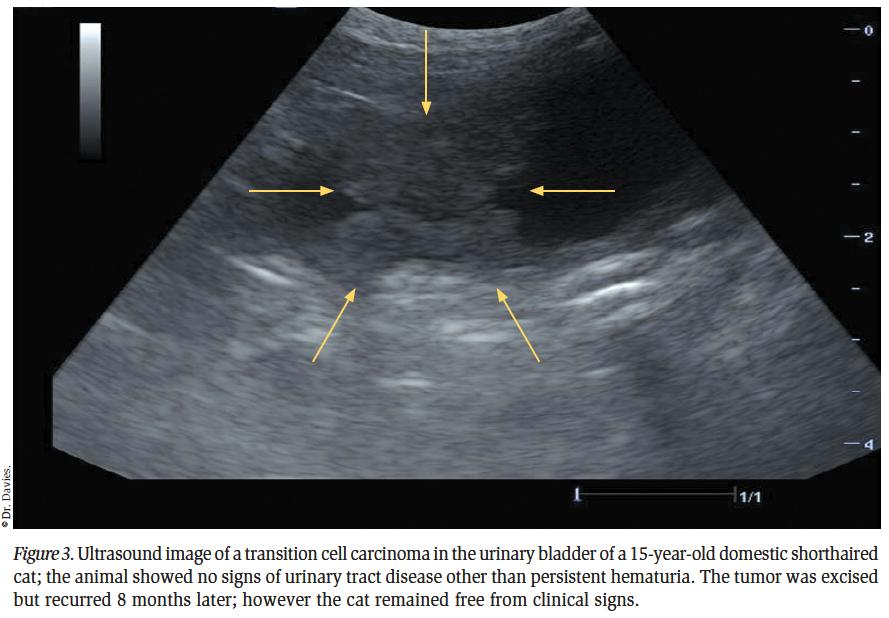 Pre-anesthetic screening of geriatric dogs has been shown to be very useful clinically; in one study 13% of dogs did not undergo planned anesthesia as a result of the findings, whilst new diagnoses were made in 30% of the dogs (8). In the UK many practices run geriatric screening centered on blood tests but pre-anesthetic blood hematology and serology tests by themselves may not be very valuable (4).

Conducting a geriatric screening program is extremely rewarding as new medical problems can be expected to be found in up to 80% of cases examined (3,8), and even in the animals where no new condition is discovered there are always issues to discuss with the owner, such as correcting poor lifestyle factors, including inappropriate diet, bodyweight control and exercise regimens. For dogs with subclinical or mild disease, advice can be given about avoidance of risk factors that might hasten progression of the disease, complementary management protocols such as nutritional supplementation can be implemented, and a rational series of re-examinations can be planned at a frequency that is appropriate for that animal.

One study involving 45 dogs conducted in my own clinic (8) revealed an average of more than seven problems per dog, some of which were serious and even life-threatening, including severe respiratory distress, metastatic pulmonary neoplasia, and abdominal tumors; nearly a quarter of the dogs were in pain. In addition to the clinical findings, owners really appreciate the time that is spent with them during a geriatric consultation. They often book their other elderly pets in for examination, and they recommend the program to their family and friends.

In financial terms the opportunity to increase practice income can be considerable; personal experience has shown that a free geriatric consultation can generate an average income per case that approximates to four times that of a standard consultation fee.

For most conditions the optimal frequency of re-examination has not been determined. Many animals requiring repeat prescription medicines for chronic disease are typically re-examined every 6 months but this may not be the optimal frequency for the animal, and I currently prefer to see animals over 10 years of age every 4 months. For some conditions there are good guidelines, e.g. the International Renal Interest Society (IRIS) recommendations for chronic kidney disease advises different frequencies of re-examination depending on the status of the animal, and sometimes 2 monthly re-evaluations are recommended.

Whilst the positive benefits of running a geriatric screening program are clear, the unexpected can sometimes occur - I recently examined a dog, presented for routine screening, which was cyanotic and in severe respiratory distress. Onset had been gradual and the owner did not even realise that her dog was having breathing problems.

Other cases can have unexpectedly negative outcomes; this is especially true when an owner has an active, apparently healthy animal which is found to have a serious problem. A typical example was a lively border collie which had a small irregular tumor in one of her caudal mammary glands. The options for conservative management or further diagnostics with a view to possible surgery were discussed with the owner. As the dog seemed well the owner elected for early surgical removal rather than a fine needle aspirate or simply monitor tumor growth. The history and physical examination, including auscultation of the chest, found no respiratory abnormalities but unfortunately, and unexpectedly, screening thoracic radiographs showed the presence of advanced metastatic lung tumors. The client elected for euthanasia before her dog was clinically affected by the condition.

However, simply offering a geriatric check may act as a stimulus for owners to seek advice. An elderly English pointer presented to my clinic with fecal incontinence; the owner told me that the invitation to attend the geriatric screen had given her a valid reason to bring the dog to the practice even though she knew the likely outcome, she would never have taken the decision herself to have him euthanized.

Owners often do not recognize the importance of signs that are typically seen in serious age-related diseases, and as a result they will not report them to their veterinarian. Screening helps to identify unrecognized problems resulting in early investigation, diagnosis and treatment. As a result patient management can be optimized; not only to relieve pain and improve quality of life, but also may prolong life itself.

CLICK HERE to read Part 1 of this article covering screening and history!

This article was previously published on VetGrad in 2012