The Prevention and Control of Bovine Pneumonia

And so the next respiratory disease season is heralded, as it has been for as long as the senior partner can remember. Why, with the advent of health planning, have we not got a better handle on
the prevention and control of bovine pneumonia?

The organisms that cause pneumonia are well understood and the cost of the disease has been well publicised. But for those who may have forgotten, they range from £22 for each animal at risk or between £40 and £80 per affected animal. 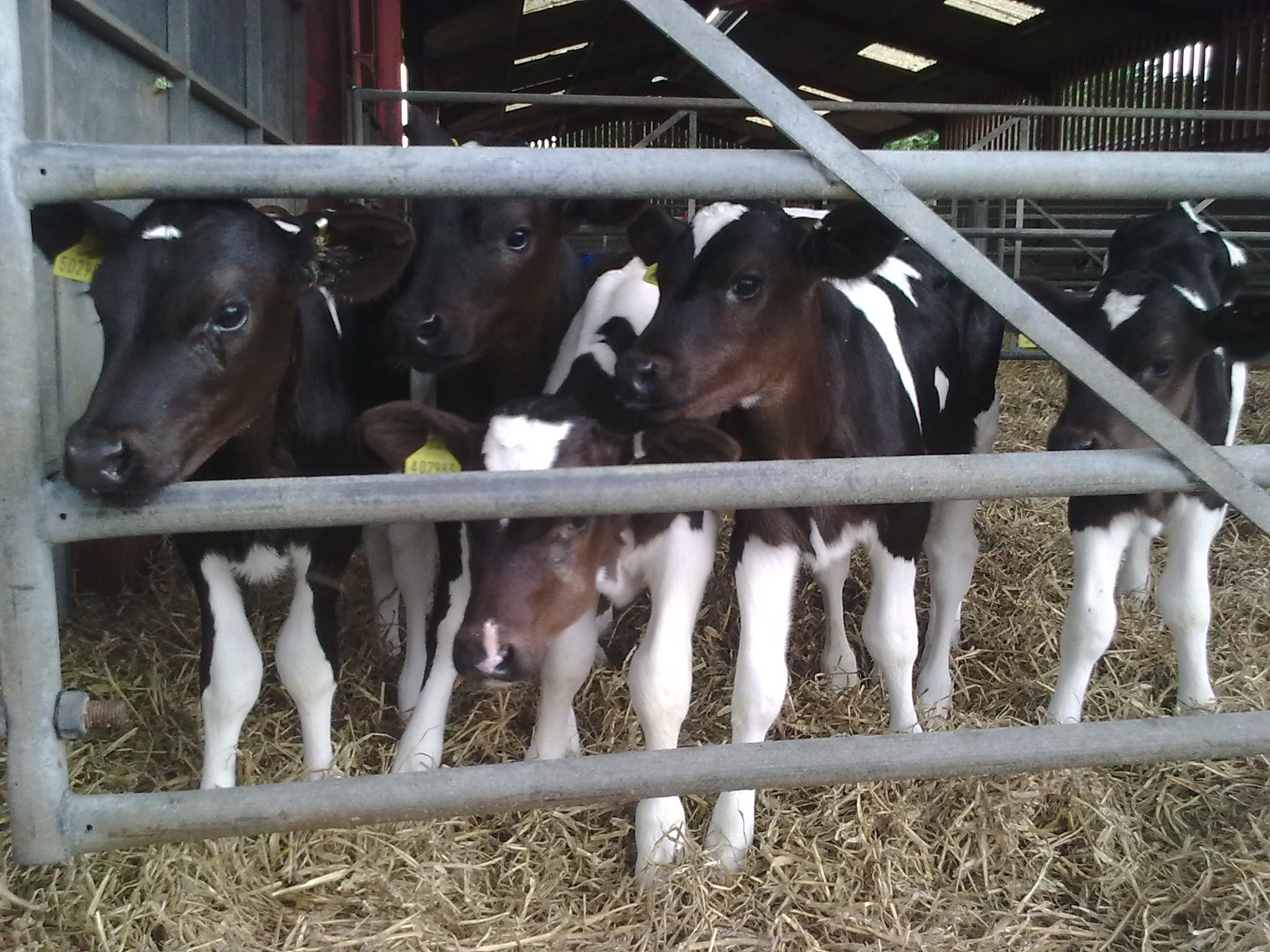 These are no small costs and they have produced a substantial financial drain in both beef production and in the growth of dairy replacements since the inception of modern beef and dairy production. These costs do not just derive from the medicines used but also from reduced weight gains, increased labour costs and mortality.

Surely the development of modern vaccines has allowed us to make progress in the prevention of the disease? You might think so, however the animal health industry still sees cattle pneumonia as one of the key claims in the development of new antibiotics. Over the last fifteen years we have had a series of new antibiotic entities entering this market from tilmicosin to fluoroquinolones, florfenicol, tulathromycin and gamithromycin. All these new antibiotics give a good clinical response when used early in the course of the disease and may show enhanced efficacy when used in conjunction with an NSAID such as flunixin, meloxicam or carprofen. However, the truth is, vaccines and antibiotics are not the answer; no pharmaceutical approach is usually successful when used in isolation.

The key to controlling pneumonia in cattle is to get the farmer to take ownership of the disease; after all it is his decisions on animal husbandry and management that have contributed to the disease. The mistakes he has made have proved expensive once he has arrived at reception to ask for the bottle of antibiotics.

Where do we start? Let’s start with the calf’s birth and its intake of colostrum, this not only provides immunoglobulins but also vitamins A and E. Rather than go metric we can stick with the advice – “six pints in the first six hours”. Colostral protection against respiratory organisms can last for up to six months.  Attention to detail in both dairy and beef herds will pay dividends in providing the foundation of a healthy life. In spring –born beef calves, from dams that have not had adequate mineral and vitamin supplementation to their diet, a multivitamin injection at birth should be considered.

The essential step in the control of pneumonia is in many ways the most difficult – assessing air quality and advising on improvements. In a naturally ventilated building the warmth of the animals causes air to rise and exit through a vent in the roof, thus pulling in fresh air through inlets at the eaves or in the walls – ‘The Stack Effect’. 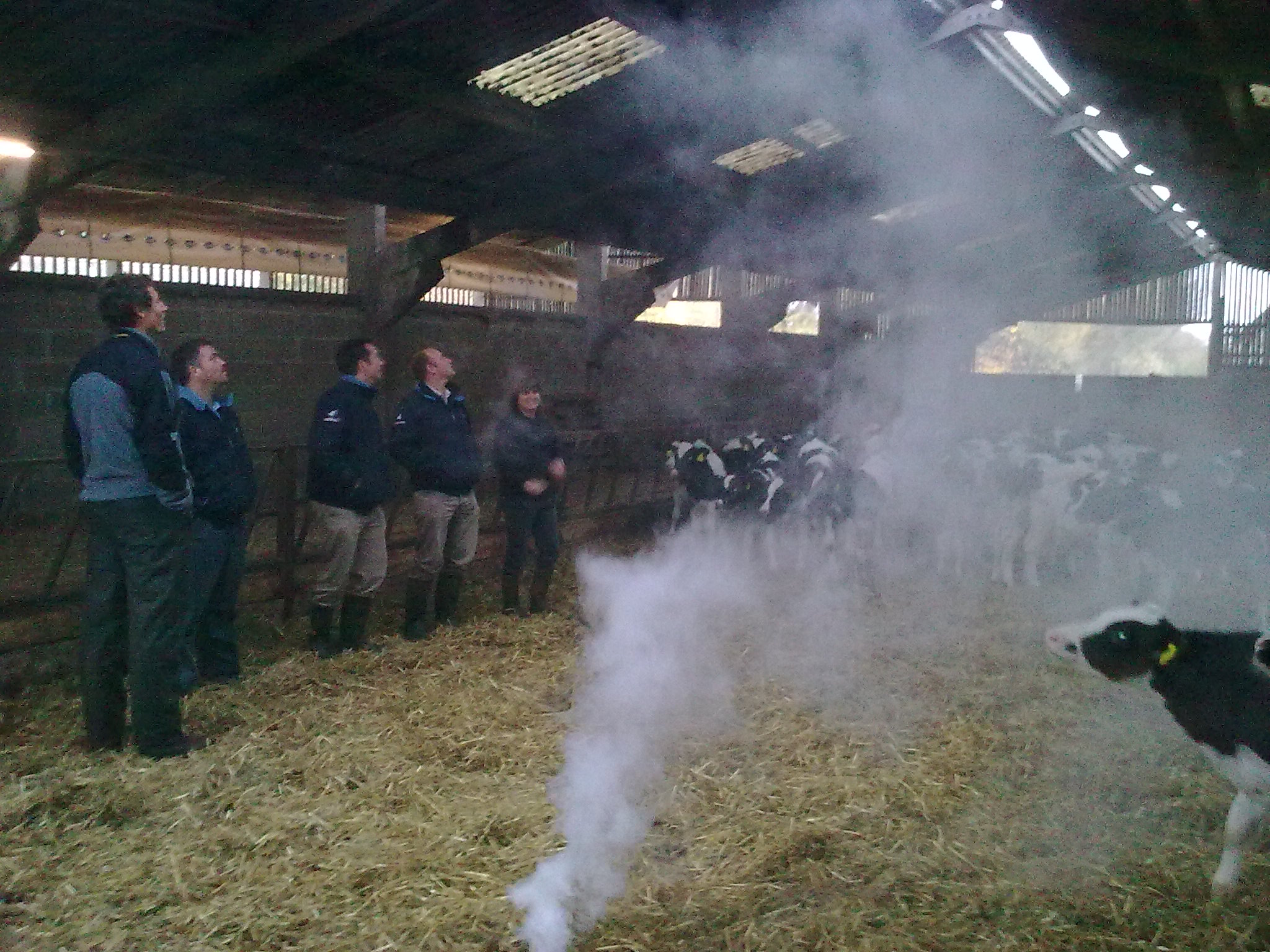 However it is not quite that simple, as hot air rises, but cools at it rises. There comes a point in most buildings, when the apex height is such that the now cool air falls back into the building returning the dust, noxious gases and infectious organisms to be re-breathed by the occupants. This effect is most pronounced when calves are housed in buildings intended for adult stock, and despite their best efforts, cannot generate sufficient heat to drive the stack effect. You may also see ‘tiger stripes’ on the purlins caused by moisture condensing as the warm air hits a cold, uninsulated roof and water dripping back on to the animals. The condensation of the moisture cools the air which can then fall back in to the building. To visualise what is going on in a shed think ‘smoke tests’. Not a smoke bomb as they tend to give off too little smoke for the average cattle shed. Think buckets of smouldering damp straw – metal bucket or a metal wheelbarrow for the straw and a plastic bucket for the water to keep the straw damp and for use in case of emergencies. Test when the animals are in the shed and move the smoke around the building to confirm the efficiency of the ‘stack’ in different zones. I would tend to test the building with the doors closed as they should not be considered as part of the inlets for ventilation – they are more a cause of draughts.

So at the end of all this we find the building is badly ventilated. This should not come as a surprise as about 50% of all naturally-ventilated sheds do not supply an adequate air flow for the weight of cattle being stocked. From now on the use of specialist advice may prove useful. However there are at least some general guidelines as how to approach the problem. Firstly; space boarding usually leads to a wall with too much board and not enough space. They are usually built with the space between the boards being gauged by putting one of the boards on edge as a spacer. Better that the gap was nearer 10 cm or approximately one hand width. Once this is sorted, to facilitate the air exchange the inlet area should be about twice the outlet area. 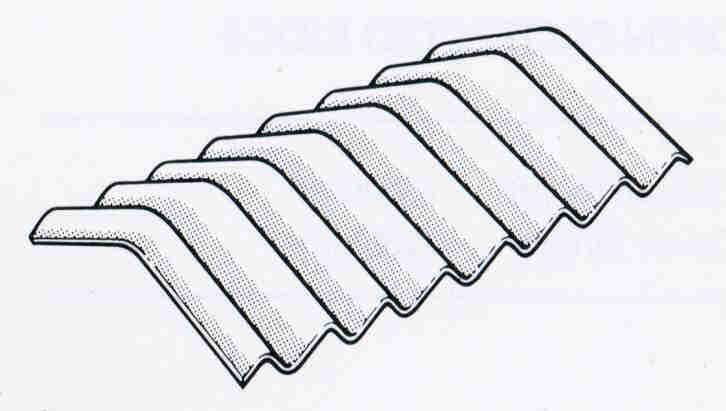 This is easy to do with a tape measure, pad of paper and a calculator. How we alter the outlet becomes a project to be considered with a competent builder. Open ridge vents should be no more than 30cm wide and they are more effective when an inverted apron flashing is attached to the apex purlins to create an elongated chimney. If the building has crown cranked ridge sheeting you will need to get out the angle grinder to cut a 25cm square in the centre of each sheet.  This is just the start, as if the shed is too wide and the apex too high we may also have to consider a breathing roof or roof slotting.

A breathing roof would normally involve altering the placement of the first three rows of sheeting working from the eaves. Each sheet is raised above its neighbour by making a sandwich of purlin, lower sheeting, baton (2.2 cm high by 7.5 cm wide) and then the top sheet. This provides for bottom edge of the sheet to be lifted allowing an air space.  A whole roof can be slotted. It is very simply the creation of a 2.5cm gap between the vertical sheets. It would seem that the rain could get in and dampen the bedding but the heat of the animals normally creates such an updraft that the rain is kept out. There are plenty of texts on altering roofs to allow increased ventilation but this is often seen as an expensive alternative to vaccination and more antibiotics bought when the next outbreak of pneumonia occurs.

It is also important during this investigation to make certain the drains are clear, the guttering is clear and that water running off the roof is taken away from the building. This should all ensure that the bedding is kept as dry as possible.

Having had a thorough rummage into the way the animals are kept the next step is to identify what you are dealing with, so that you can recommend a vaccination program. Collect either fresh clinical samples or paired blood samples from recovering cases. This is best planned in conjunction with your diagnostic laboratory – follow their recommended protocol for sample collection. 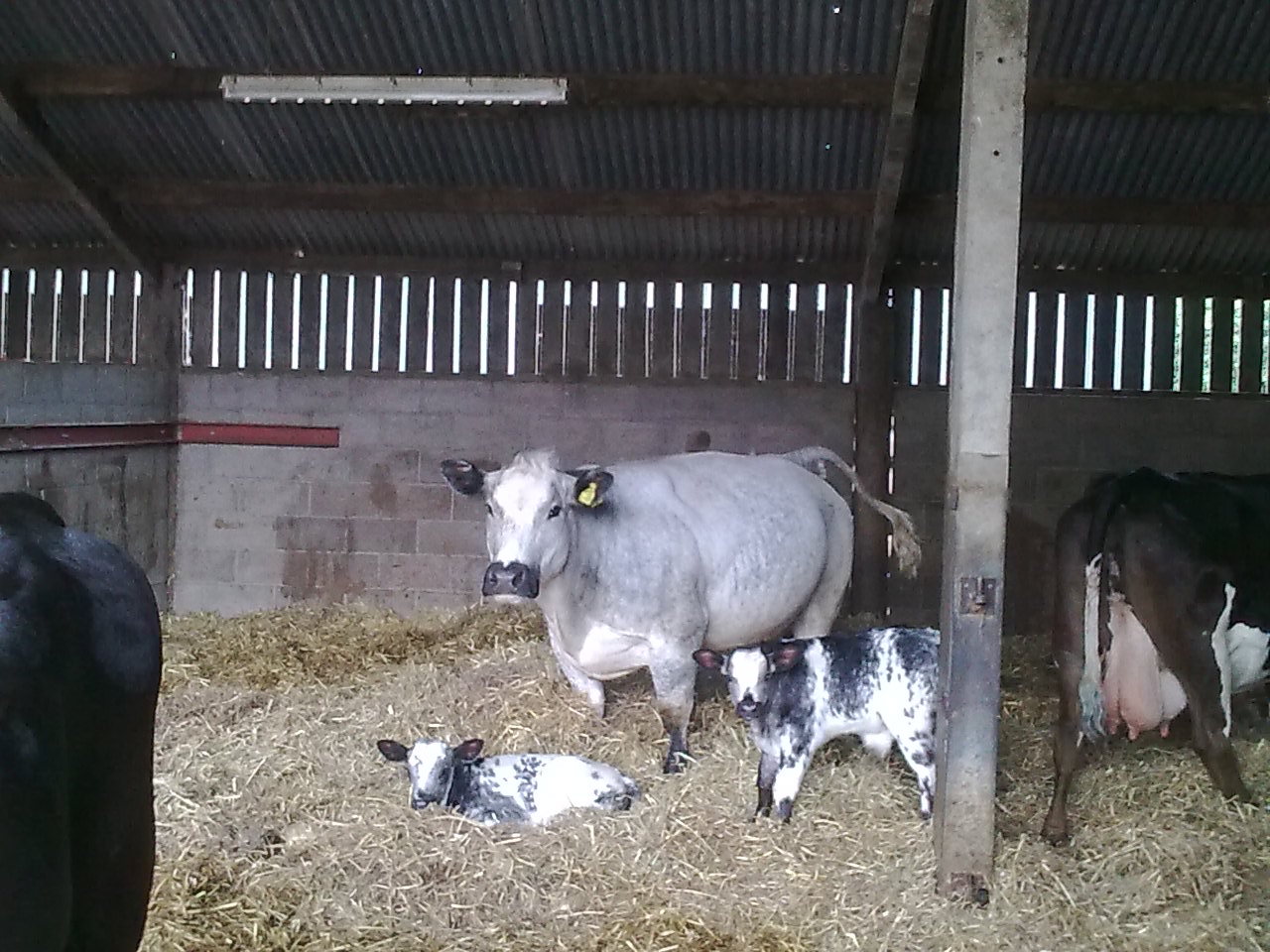 Eventually we will have everything in place; especially the farmer’s understanding of how he can improve the way he looks after the cattle and when and with what he will be vaccinating the animals. Written down it becomes the ‘Health Plan’. Your client may still need to use an antibiotic for the now occasional case of pneumonia! Do not fall in to the trap of allowing the antibiotic to be handed out – especially early in the season. There are plenty of other husbandry and animal management issues that can contribute to a pneumonia outbreak. For instance, one year he may choose to go to market and buy five batches of calves from different sources and of different ages and mix them together in the same building. The problems can change each year. As the farmers can be reluctant to accept the offer of a visit rather than a bottle of antibiotic you could use the lower price per treatment and the veterinary use only claim associated with tilmicosin (Micotil, Elanco Animal Health) to justify a visit. This would enable you to re-visit the health plan and double check on how your advice is being followed not only by your client but all the farm staff.

With thanks to the George Veterinary Group Farm Practice in Malmesbury, Wiltshire for the photographs