A Review of Fears and Phobias

and the place of herbal medicines in their treatment

A phobia occurs when there is disproportionate fear in response to a situation that is perceived as dangerous1. A phobia is characterised by being persistent, excessive and irrational. Dogs that experience separation anxiety may be more likely to experience noise phobias2. In some cases the noise phobia may relate to a specific frightening event but in others there is no obvious trigger. Phobias generally get worse over time without treatment.

The causes of phobias are complex and not completely understood in humans or animals. There are various psychological theories and biological causes have, until relatively recently, received less attention but investigation into brain biochemistry in humans suggests that there may be some abnormalities in the levels of some neurotransmitters, such as norepinephrine/ noradrenaline (the catecholamine involved in the fight or flight response), GABA, serotonin, dopamine and possibly adenosine.

Adenosine is largely inhibitory and may act as a neuromodulator.

GABA, or gamma-aminobutyric acid, is the most abundant inhibitory neurotransmitter in the brain. GABA helps induce relaxation and sleep and inhibits over-excitation of the brain. Motor control, vision, and anxiety are regulated by GABA.

Low levels of dopamine and serotonin have been associated with depression and social phobia in people and linked to anxiety and fear – although cause and effect have still to be established. Serotonin is also involved in memory and learning.

In common with many conventional treatments, it is often not known exactly how herbal medicines fully exert all of their specific effects, although research is beginning to identify some explanations that would have been beyond the comprehension of herbalists working in a historical setting.

Mainstream pharmaceuticals offer specific targeted effects, often referred to as the ‘magic bullet’. Herbal treatments contain thousands of different plant derived chemicals and are likely to be more diverse in their action. As these diverse effects may treat co-morbid conditions, act at multiple levels or balance other disruptions in homeostatic mechanisms caused by the disease processes, herbal treatments can give good results.

The complexity of the biochemistry of fears and phobias means that it is difficult to give definitive answers to mode of action. In this paper we discuss some recent research and how it might relate to treatment with Dorwest Herbs’ Scullcap and Valerian Tablets.

Valerian modulates GABA transmission, possibly via the action of valepotriates and valerenic acid to decrease CNS activity resulting in a calming effect4. It is also a serotonin agonist and has activity at adenosine receptors5. Humans report a reduction in stress when valerian is administered and it also improves sleep quality6.

A parallel, double-blind, flexible-dose, placebo-controlled study published in 2001 identified that valepotriates could have a potential anxiolytic effect on the psychic symptoms of anxiety.7

Scullcap contains ten different flavonoids: polyphenolic compounds that are mainly known for their antioxidant activity. There is also evidence to suggest that GABA receptor activity may be influenced by Scullcap flavanoids 11.

A review of herbal medicines in 2007 concluded that there was the potential for significant use in psychiatry for Scutellaria lateriflora (Scullcap) to treat anxiety disorders and more research was urgently required. 14

Mistletoe contains phenolic compounds, alkaloids, flavonoids, sterols, triterpenes, fatty acids, amino acids and amines, such as histamine and tyramine8. There is no degree of certainty regarding the mechanism of action, although there are some interesting areas of study that could give some indications of a neurological effect. There is some evidence to suggest that mistletoe’s anticonvulsant effects may occur due to decreased glutamate and glycine binding in synaptic membranes in the hippocampus. Recent research has linked the ventral region of the hippocampus, with anxiety-related behaviours9. Another study has suggested that glutamate receptors in the brain could play an important part in ‘unlearning’. The failure to ‘unlearn; has been identified as a hallmark of post traumatic stress and anxiety disorders as sensory cues trigger recall of distressing memories and the associated stress10. 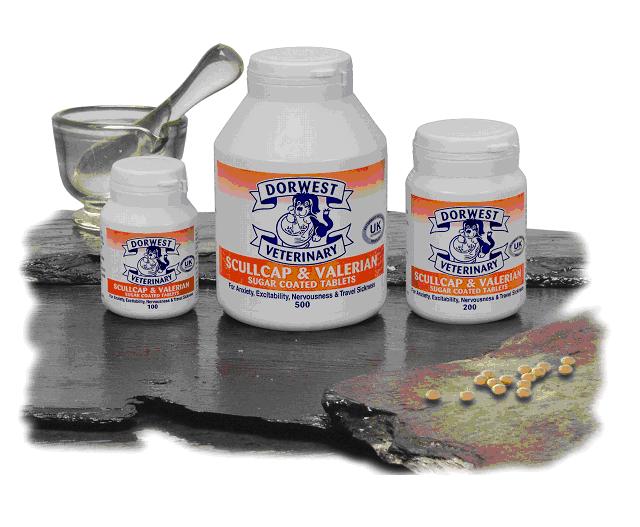 Scullcap and Valerian Tablets are the only herbal veterinary herbal medicine licensed for the treatment of cats and dogs.  They are AVM-GSL licensed.  They are indicated for the symptomatic relief of anxiety, nervousness, excitability and travel sickness and also as an adjunct in the treatment of epilepsy in dogs and cats.  They do not cause drowsiness or impair normal behaviour, making them an especially good option for the treatment of noise phobias. Suitable for use during a desensitisation programme to reduce stress.

Dosage: Dogs and cats 1-2 tablet per 5kg bid, dependant on severity of the fearful response. For firework phobia administer the second dose 2 hours before dusk.

Contraindications: No data is available to support the use of this product in pregnant and lactating animals. Therefore the use of this product is not recommended in these situations. In the five year period between 2002 and 2007 over 3.3 million doses of Scullcap and Valerian Tablets were sold with only three adverse reactions reported. This medicine can be used alone, or as necessary in conjunction with conventional medicines with no recorded interactions.  For further information contact: