Home 10 Minute Top Up CPD Resources How To YVN Need to Know Jobs Oops PDP/PDR Why Bother?
BVA highlights work of British vets in fight against rabies
British veterinary surgeons are making a considerable contribution towards alleviating rabies across the globe, according to the British Veterinary Association.
The BVA marked the seventh World Rabies Day on 28 September by highlighting some of this important work.
World Rabies Day is an annual event led by the Global Alliance for Rabies Control to provide a unique platform for individuals and organisations to raise awareness and understanding about the importance of rabies prevention. This year's theme 'Rabies: understand it to defeat it' celebrates the educators and communicators whose work is essential in helping more people protect themselves against the disease.

"Despite becoming a forgotten disease in western Europe many UK vets are playing a part in helping to eliminate canine rabies. As well as those working overseas who tackle the disease on a daily basis, there are vets and virologists based in the UK who are making a considerable contribution towards alleviating the burden of rabies."
· AHVLA
The work of the UK's Animal Health and Veterinary Laboratories Agency includes controlling or understanding rabies worldwide. They undertake confirmatory diagnosis and virus characterisation for other countries on behalf of the OIE as well as having their own research projects, and collaborating with others.
· Afya Serengeti
Professor Sarah Cleaveland from the University of Glasgow, a founding director of the Alliance for Rabies Control, leads the Afya Serengeti Project - a rabies elimination project which is supported by MSD Animal Health.
Around 50,000 dogs are vaccinated every year as part of the programme which is resulting in a reduction in the number of cases of human and canine rabies, and canine rabies has now been eliminated in some parts of the Serengeti ecosystem.
· Help in Suffering, Jaipur
Help in Suffering (an animal welfare charity in Jaipur, India) has been involved in street dog and rabies control since 1994, and has documented the effects of the work.
Jack Reece, a British vet who has worked at Help in Suffering since 1998, explained:
"As a result of the sterilisation and vaccination against rabies of street dogs we believe we have reduced the number of human rabies cases in the city perhaps to zero. We have reduced the street dog population by 48%, and we believe we have caused a reduction in human dog bite injuries from over 7 per 1,000 population to 2.7 per 1,000 population. Through data collection we have also worked out both longevity and fecundity estimates for street dogs in Jaipur, and reported both seasonality in street dog breeding and an association between breeding season and human dog bite cases." 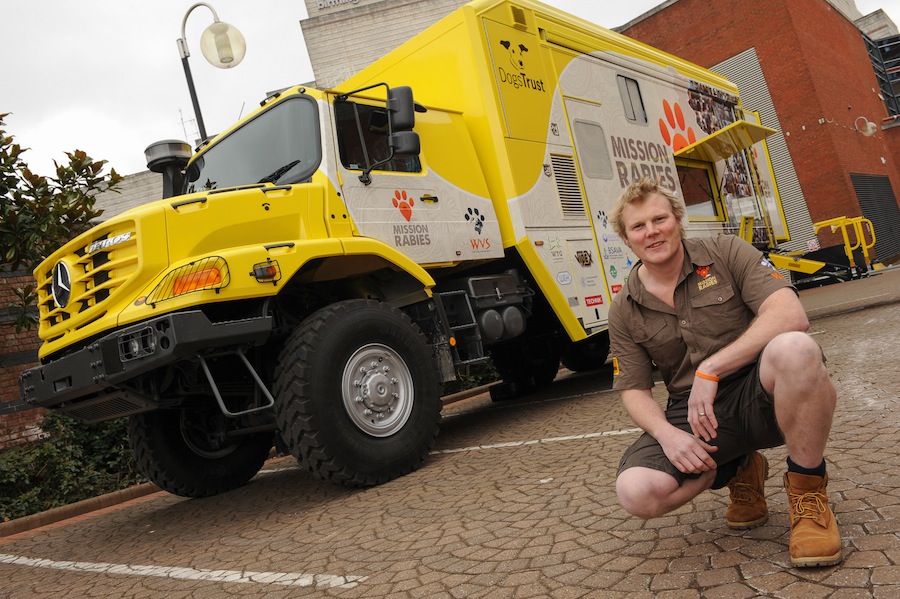 Luke Gamble with his Mission Rabies truck
· Mission Rabies
Mission Rabies, led by British vet Luke Gamble, launched this month with a 30-day mass vaccination campaign in India. The purpose of this is twofold: to achieve a target of vaccinating 50,000 dogs in 30 days across ten selected rabies hotspot areas, and secondly, to attract huge public support (both in India and internationally), promote community awareness and to generate sponsorship for the India National Rabies Network.
· Veterinary students
Veterinary students from the UK are also playing their part in rabies research. Abi Waddington (a BVA overseas travel grant recipient) and Nikki Pasturel from Nottingham Veterinary School are currently in Goa undertaking a project which includes a component on rabies in the local dog population, providing critical information in ongoing research and planning into control and eradication of rabies.