Comfortis® now available for cats and in two new sizes 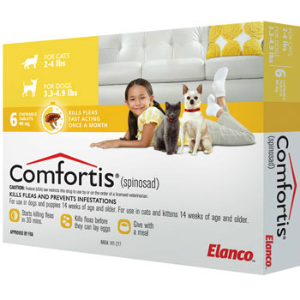 Following the success of Comfortis® chewable tablets for dogs, the flavoured chewable flea control tablets are now licensed for cats and Elanco Companion Animal Health has further extended its range with the addition of two new sizes for toy dogs and smaller cats.

Comfortis chewable tablets for dogs and cats are convenient, fast-acting, monthly oral adulticides that start to kill fleas in cats and dogs in 30 minutes and rapidly acheive 100% efficacy.  Comfortis chewable tablets for dogs and cats provide protection that lasts a full month and the fast speed of kill means that adult fleas are killed before they can lay eggs, making Comfortis effective in preventing new infestations.  In addition, it remains fully effective despite frequent shampooing, bathing or swimming.  Comfortis can be used alongside other treatments such as wormers and there is no pesticide residue on a pet post-application, therefore the efficacy is not affected by a cat’s natural and common grooming behaviour.  Moreover, Comfortis contains the active ingredient, spinosad.

Patrick Bourdeau, Dip ECVD-Dip EVPC, of the Veterinary School of Nantes France says: “Comfortis offers a highly effective format to those owners who have not had relief with other forms of flea control. The tablet offers a high level of convenience to owners to ensure both cats and dogs receive immediate relief from flea infestation.

“This is especially pertinent to the nearly 30% of cat owners who have reported problems with administering other forms of flea treatment, including spot-ons, which can have an effect on efficacy,” says Bourdeau. “This includes the animal escaping when they sense a topical treatment is about to be administered or during actual administration.

“Comfortis is a highly effective treatment for flea control for cats and dogs,” adds Bourdeau, “and one that will aid with compliance because it is easier to administer correctly.”

Charlotte Mayne MRCVS, principal and veterinary surgeon at The Mayne Veterinary Clinic in Colchester, Essex, agrees. She said “We have used Comfortis chewable tablets for cats in practice, with 94% of clients who were prescribed the product for their pet being able to administer Comfortis and 80% of owners able to give the treatment so easily that they did not need to pill it2.  Indeed, all the clients who were able to administer the treatment said they would use it again with comments such as ‘it’s brilliant – the best product ever’ to ‘my cat ate it like sweets’ and we had ‘lots of dead fleas’.”